Thank you to everyone who came out and made this year’s People-Powered Publishing Conference a fantastic event!

This year’s conference came weeks ahead of the primary elections and the 2020 Census. We invited presenters and experts to help leverage special coverage into improvements that make your newsroom more engaged and more essential to the communities they cover.

If you attended the conference, please take a moment to tell us what you found most helpful.

Thank you again to all those journalists, community organizers, academics and others who came out to Columbia College Chicago on November 14-15 and made it a great conference.

Stay tuned to ILHumanities.org for more details about what we have planned next. 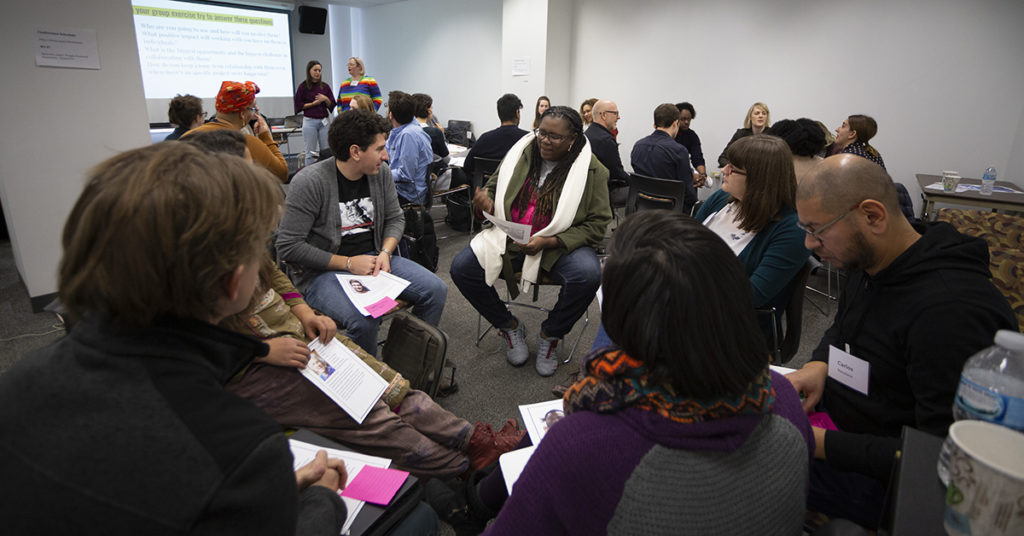 This conference aims to provide a space for journalists, civic-engagement practitioners, and community storytellers to work together on a shared goal: strengthening the connections between news organizations and the people they cover, in order to create a more collaborative and equitable news and information landscape.

We believe that successful engagement is inherently collaborative, and that “engaged” journalism extends beyond the work of the newsroom.  This two-day conference provides tools for journalists, civic-engagement specialists and community storytellers to create a more collaborative and equitable news landscape by strengthening the connections between news organizations and the people they cover.  We’ll take a hands-on approach to explore where educators, artists, tech developers and others share common goals with journalists.

Over the course of two days, we’ll take an in-depth, hands-on approach to the challenges and opportunities surrounding engagement-driven journalism.  At the same time, we believe that successful engagement is inherently collaborative, and that “engaged” journalism extends beyond the work of the newsroom. We’ll think creatively and strategically about how journalists and people outside the newsroom — educators, artists, technologists, organizers and more — can work toward common goals.

At the 2018 People-Powered Publishing Conference, 17 news organizations went through two days of intensive workshops to develop the seed of a community engagement project into a executable project. Five of the projects were then selected to receive funding and ongoing mentorship and training to complete the project over the next six months.

“Bringing Asylum City to the Streets”

As part of the Asylum City collaborative storytelling project on the experiences of asylum seekers in Chicago, 90 Days 90 Voices planned to hold a facilitated conversation to explore unconventional ways to bring their reporting to those most affected. By bringing together those working with asylum seekers and organizations working with refugees and immigrants and their allies, 90 Days 90 Voices used the event to help design the public display and determine its location.

The project culminated in the summer of 2019 with a series of posters that connected asylum seekers with artists to help tell their stories. The posters were then displayed in areas of Chicago participants at the facilitated conversation helped identify. The posters both stood on their own as a unique format for reporting the experiences of asylum seekers, connected audiences most invested in the topic with 90 Days, 90 Voices full reporting series, and strengthened the community actors that contribute to organization’s journalism.

At the conclusion of the project, 90 Days, 90 Voices was seeking grant funds to expand the facilitated conversations to both other reporting projects, as well as periodic check-ins on the editorial direction of the entire organization.

Through the project, Irene Romulo was able to connect with existing networks within Cicero organized around civic issues like school reform that were prompted unmet demands for news. It also connected with other journalists with an interest in immigrants in the suburbs who shared a similar approach to reporting.

While the initial goal was to assess news needs, by the end of the project Romulo had identified needs, collaborators to help work on those needs, and was scheduling the launch of the first editorial projects for El Cicero Independiente.

14 East explored ways to make its reporting on how to make the issue of lead in Chicago’s water more impactful for the college students most affected. The project team recruited students to get their water tested through the city’s program as part of the project. Through a series of one-on-one interviews and group discussions, the team hoped to learn how students navigate the city’s water testing system and how to better link water quality stories to other concerns among college students.

During the numerous listening sessions, the project team discovered a number of unmet information needs among students, including their rights as renters, how to vote, and other needs. The magazine produced 12 stories that connected water quality to issues that already had urgency among students.

At the end of the project, the team was planning similar practices at the launch of other series and was restructuring an issue for returning students that better responded to the concerns heard during listening sessions about urgent information needs.

The magazine about the personal experiences of immigrants living in Chicago held a discussion with past and current contributors and other writers in Chicago’s immigrant community to help determine future priorities for the publication. The event was intended to bring together immigrant writers volunteering with the magazine that have not met in person before to discuss with editors ideas for future editorial projects, themes for future issues, and strategies for building a stronger community of writers exploring immigrant experiences in Chicago.

The event prompted strong turnout among writers and the project team discovered an unmet need among their own contributors to connect with one another. The discussion drew out new opportunities to get the community around the magazine involved beyond contributing pieces of writing or photography.

At the end of the project, the team was designing an ongoing writing workshop that would build the skills of their writers and reinforce their bonds to each other and Coordenadas, while also providing new opportunities for involvement beyond editorial submissions.

The Cortico collaboration with the Newmark Graduate School of Journalism at CUNY and Mott Haven Herald planned to expand their community dialogue series from Madison, WI, to New York City. The project was to host community conversations in partnership with three libraries in the South Bronx to determine unmet information needs of those living around the libraries. The discussions intended to draw out community concerns for the libraries seeking to increase the relevance of their programming and create a record of local priorities and comments that journalists can draw on to better address the information needs in the South Bronx.

The project held a range of meetings that drew out connections between the library, residents, and other community organizations around unmet news needs. The pilot convinced the library to expand from three to nine locations and to devote its own staff to the ongoing project.

At the end of the project, Cortico was planning for the expansion and exploring how it could identify locals within individual communities to lead discussions that would better identify needs in the neighborhood as well as bolster long term sustainability as the project grows.

To learn more about previous conferences and read descriptions of past sessions, visit:

City Bureau is a newsroom and journalism training lab that seeks to regenerate civic media ecosystems within historically disenfranchised and underreported neighborhoods, and to create a sustainable pipeline of innovative and locally responsive reporting on the city’s South and West sides.

ProPublica Illinois is a non-profit newsroom focused on investigative journalism in the public interest. It is the first state-level expansion of ProPublica, headquartered in New York City.

Gather, a project and platform to support community-minded journalists and other engagement professionals, is a collaborative initiative led by the Agora Journalism Center, the gathering place for innovation and communication in civic engagement, at University of Oregon’s School of Journalism & Communication.

GroundSource is a community engagement platform that powers direct, two-way conversations between newsrooms and the communities they serve, to gather on-the-ground perspectives and build lasting relationships.

Coral by Vox Media brings journalists and their communities closer together through open-source tools and best practices for newsrooms of all sizes.

Hearken is an audience-driven model and platform enabling newsrooms to meaningfully engage the public throughout the reporting process, resulting in original, relevant and high-performing content.

This conference is made possible in part by our partners and hosts at Columbia College Chicago, an international leader and recognized pioneer in arts and media education.

Journalists, students, and community engagement leaders from all over the country gathered for Illinois Humanities’ first…