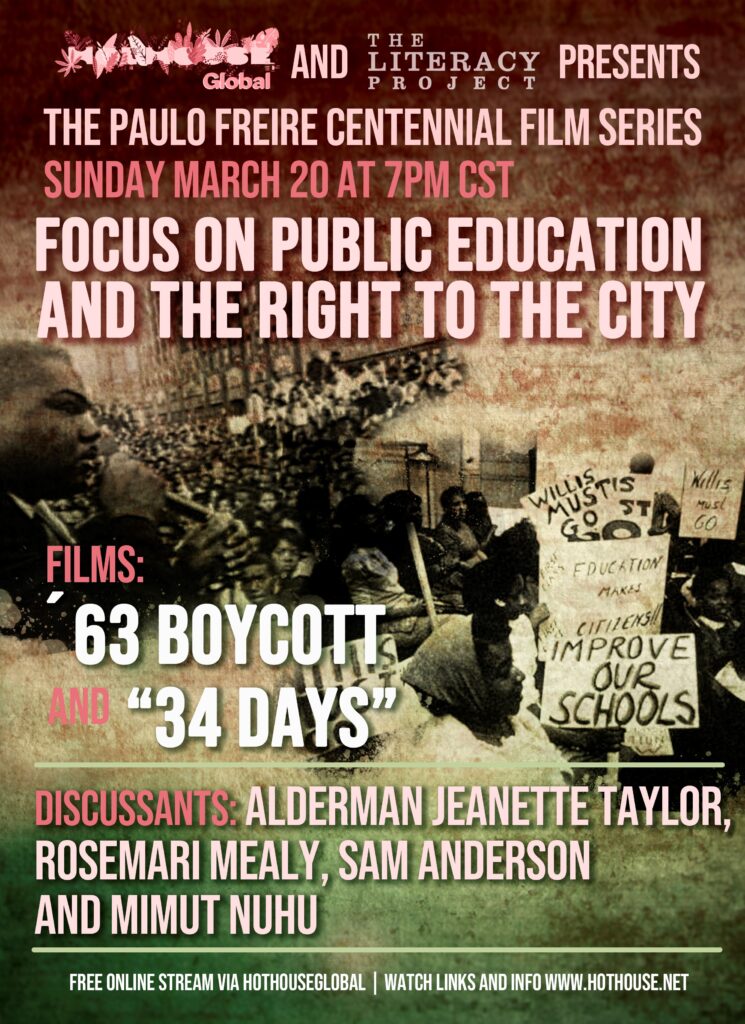 The Paulo Freire Study Guide, in which a set of digital documents (oral histories and dialogues among speakers / interlocutors), along with collected film, print, and other resources, are being developed to illustrate the key precepts for building pedagogies for the oppressed.

HotHouse
Founded in 1987, HotHouse was formed to provide sustainable environments for innovative artistic exploration and a wide range of progressive discourse. HotHouse achieves its mission by: instigating and facilitating participatory multi-disciplinary events that create opportunities for high caliber artistic practices; that extend our collective resources into underserved communities and foster the international exchange of ideas and methods within the context of progressive social change praxis.

Q1: How do you see the arts/culture/humanities as being essential? 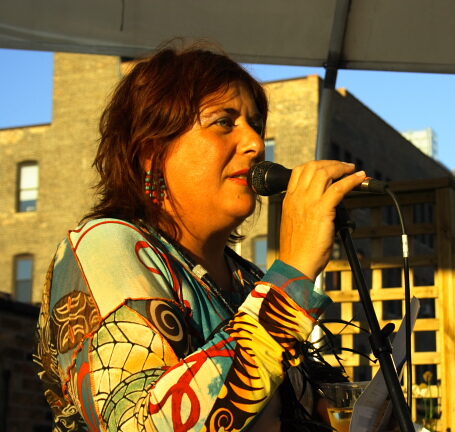 Marguerite Horberg: I believe the expressions of the human condition through the arts and humanities is the window through which we contemplate the universality of our plight.

For instance, when we look at art made in the late 1940’s, in the wake of Hiroshima and the “war to end all wars”, words were simply not enough to express the toll and the collective weight sentient beings experienced. We needed Leon Gollub and Jimi Hendrix, Pablo Neruda, Lee Bontecou and Stanley Kubrick to alter public spaces to fit the consciousness.

Today, faced with the same horror of George Floyd’s murder – a murder that stood shorthand for the hundreds of years of racist sadism inflicted on black men, we see that it is the murals from Cairo to Lima with George’s face, the refrain “I can’t breathe’ as the spoken word metaphor and the work of Jordan Peele, Craig Harris, Niki Mitchell and Octavia Butler moving into the same poetic spaces that let us process the enormity of the calamity we face as humans. It may be the only way we can endure and keep acting in love when faced with such odds.

Q2: What is the most important thing people should know about your work?

Marguerite Horberg: For several decades, HotHouse has been endeavoring to broaden and deepen the space for international cultural exchange. We were organized in the wake of the Reagan and Bush Sr. years when the “Rambo” narrative about US empire was dominant and the many covert wars abroad were exposed. We created HotHouse as a means to break through the bubble of information and disinformation that was peddled in the mainstream and to build a space for a direct people-to-people conversation that was best presented through arts and culture.

We determined early on that popular and accessible platforms would build multi-racial and multi-disciplinary avenues outside of academia, and these were essential to reach working class people and other disenfranchised populations that had been excluded from institutions. We observed that universities and think-tanks held symposia and gatherings for scholars and academics and these kinds of conclaves were inaccessible to most people. We also observed that grassroots endeavors needs partners with resources. Our goal became to create the same kinds of high caliber work, the same kind of access to public intellectuals, filmmakers, composers and activists that were available to the elite and to contribute our labor and work product to advancing social justice causes.

Q3: How did you arrive at doing what you do?

Marguerite Horberg: In 1977, at the age of 19, I left my one year of university studies and commenced to hitchhike around the globe as a solo woman traveler. I lived for two years stretching out the $3,000 I had saved waitressing and teaching English in Taiwan. My travel to impoverished small villages throughout Asia, walking long distances in the Himalayas, and driving overland through “forbidden lands” that would be later marked as “enemy territory” (Iran and Afghanistan) forever engrained my sense of obligation to economic justice and an eternal bond to nature.

This foundational experience informs recurrent themes in my work of alienation, displacement, migration, nature, inequity, yearning and impermanence. A through-put idea of anti-imperialism and anti-militarization and connectivity to activists and advocates for peace is another underlying impulse in my work. Upon returning from overseas in 1981 I began several small businesses reflecting these interests. HotHouse was borne in 1987 when the desire to create a space and platform for international culture was solidified.

Q4: Who makes your work possible?

Marguerite Horberg: Since 1987, HotHouse has been at the forefront of instigating projects that contributed a counter narrative to the American experiment. We have sought partners and collaborators throughout the city and from around the world. Recognizing a debt to enslaved people, our work has largely centered the African Diasporic and Black Atlantic voices through spoken word, music and cultural exchange. Numerous projects have also been developed to support jazz artists, women, indigenous voices and explicitly anti-imperial/internationalist developments. Our programs take the shape of: one-off concerts (with many US debuts), long-form series (like the WPA 2.0, a brand new deal) that explore a theme through a multi-faceted lens, festivals, travel, exhibitions and facility operations. Since our inception, we have produced more than 7,000 unique events for more than 1 million people.

At present, our primary focus is to build a new permanent home for HotHouse. The board and many volunteers have been advancing a site in Bronzeville.

My artistic practice over three decades has been prototypical for integrating social engagement as a key principal – wherein I have created an ongoing series of instigations via public “situations”. As a discipline, my work has enfolded public performance, fashion stagings, art installations, photography, and video, as social engagement tools.

Examples and highlights of this work would include creating Faction Xlll, a collaborative project of sculptors, textile artists, and “fashion designers” who presented a body of work together in the mid-1980’s. I was the convener of multiple exhibitions and “happenings” of this collective, including stagings at LillStreet Art Center, The Belmont Hotel, The Limelight and several other nightclubs and in many industrial loft spaces. I was a principal participating artist in these events with my own feminist commentary on the apparel industry taking shape as garments and other body adornments. This work was chronicled contemporaneously in the Chicago Tribune and most recently in a scholarly article penned by art historian Rebecca Zorach.

Other notable examples of earlier work include an installation at Name Gallery (“Track the Man Down”) that was mentioned in Art in America and performance pieces (“Marco Polo and I”) at Club Lower Links.

More recently, examples of public-facing work include two photo exhibitions (Cuba Si, Bloqueo No!) in 2018 and 2019 (Uri Eichen Gallery, p.o. box collective) and the 2020 video production of the online concert, 50-50, All Souls to the Polls. These exhibitions of media production illustrate the strong commitment I have made to the integration of radical social commentary and the facilitating of “action steps” as integral to the presentation of my work. The intent is to disrupt the more passive construct of “viewing” art and patronizing its creation as a commodity.

This year I am the producer of a documentary film on “the Other Guantanamo” building on several years of work in the region.

The PAIGC’s Political Education for Liberation in Guinea-Bissau, 1963–74
PAIGC = Partido Africano para a Independência da Guiné e Cabo Verde or African Party for the Independence of Guinea and Cape Verde

Illinois Humanities highlights the work of our Community Grants program partners through our “Grantee Spotlight.” It shines the light on our grantee partner’s work, offering details about the organization and the funded project, as well as a Q&A with a team member at the organization. More: ILHumanities.org/Spotlight

Illinois Humanities, the Illinois affiliate of the National Endowment for the Humanities, is a statewide nonprofit organization that activates the humanities through free public programs, grants, and educational opportunities that foster reflection, spark conversation, build community and strengthen civic engagement. We provide free, high-quality humanities experiences throughout Illinois, particularly for communities of color, individuals living on low incomes, counties and towns in rural areas, small arts and cultural organizations, and communities highly impacted by mass incarceration. Founded in 1974, Illinois Humanities is supported by state, federal, and private funds.