In this guest essay, Visions of Justice: Urbana-Champaign contributor and community journalist Brian Dolinar evaluates the current political landscape surrounding the movement to decarcerate across the U.S., throughout the state of Illinois, and in his hometown of Urbana-Champaign, IL.

The views expressed in this piece belong to the author and do not necessarily reflect those of Illinois Humanities.

On a bad day, those of us seeking justice can find little to be hopeful about. The recent acquittal of Kyle Rittenhouse again reminds us that the law is designed to protect white lives. Even after widespread protests and demonstrations following George Floyd’s murder, we still need to remind the nation that Black Lives Matter.

We have been met by opposition not only from “Tough on Crime” conservatives, but also liberal allies. In Minneapolis, a “Defund the Police” ballot question was defeated by voters, who were swayed by the aggressive attacks of the Police Federation and liberal white mayor Jacob Frey. A day after the vote, Black Visions, the organization that spearheaded the effort to get Question 2 on the ballot, released a statement pointing to how more than 60,000 people voted yes to rejecting the status quo of policing. They remained hopeful: “Our people committing to moving toward a world beyond police is a victory.”

Who Are We Rescuing?
In my own hometown of Urbana-Champaign, located two hours south of Chicago, and home to the University of Illinois, we just lost a 10-year fight to oppose renovations of the county jail. On November 18, 2021 the Champaign County Board voted to approve a plan to spend $20.4 million on the jail, with $5 million coming from American Rescue Plan Act (ARPA) funding. Across the country, ARPA monies are becoming a slush fund to pay for police, jails, and prisons, with the Biden administration giving tacit approval.

In Champaign County, ARPA money was allocated after repeated appeals from the local sheriff, Dustin Heuerman, a Democrat who was elected in 2018 as a supposed progressive. The plan, which includes building two new pods, was advanced by Democrats who wanted to provide a “safe jail” (a contradiction in terms).

Community members went to the county board meeting on November 18, 2021, expressing their opposition to using rescue money on the jail. Drake Materre, a community activist, spoke during public comment: “Who are we rescuing by giving money to the county jail, besides those who will receive the contracts to reconstruct the county jail?”

Others asked the county board to hold off any decisions about the jail until the Pretrial Fairness Act takes effect January 1, 2023. The bail reform measure was included in an omnibus bill package passed by the Illinois Legislative Black Caucus in the wake of George Floyd’s death. The Illinois Network for Pretrial Justice, a coalition advocating for the end of cash bail, sent a letter to the Champaign County Board that was read publicly at the November 18 meeting by Hiba Ahmed. “After Illinois ends the use of money bond,” the letter states, “the number of people in county jails is expected to decrease significantly. In preparation for these changes, the Champaign County Board can best serve its residents by exploring and investing in viable and supportive alternatives to pretrial incarceration. These will have more long-lasting benefits than any investment in a jail expansion could hope to achieve.”

The jail proposal passed overwhelmingly. The vote was led by Democrats who recently took over a majority on the county board after decades of Republican control. Only one board member voted no—Emily Rodriguez, a Latina Democrat and former Chair of the Champaign Police Citizen Review Subcommittee.

Look At Me
Although a few reform measures like the Pretrial Fairness Act were passed by the Illinois legislature in Springfield after the police murder of George Floyd, since then the window of opportunity has closed. In the veto session this past fall, a bill supported by a group I worked with, Parole Illinois, addressing extreme sentencing, was blocked in the Senate by John Connor, a Democrat from Crest Hill, Illinois who is campaigning for a judge position. A bill limiting the use of solitary confinement in Illinois prisons is dead in the water. Another relatively harmless bill making it possible for those inside prison to vote was also stalled.

On a good day, I am inspired by those on the inside. Even though they are facing years in prison, they continue to struggle and strive against the odds. I recently wrote about three women— Jamille Brown, Sharonda Miller, and Mishunda Davis—who organized a hunger strike to protest a flooding of raw sewage at Logan prison, the state’s primary women’s prison. The article, “Hunger Strike, Ceiling Collapse, Lawsuit Spotlight Deteriorating Conditions at Women’s Prison in Illinois,” was published in the October issue of Prison Legal News, a 30-year publication produced by and for people in prison. Mishunda Davis told me the strike was for all the women suffering at Logan: “This is about everyone, not just one person.”

Another inspiration was watching “Look At Me,” a recent performance of poetry and theater created by 21 women at Logan prison, among them the three hunger strikers. A two-hour long video of the event with performances and a panel discussion that aired on October 27, 2021 can be viewed online. Made through a joint partnership between IDOC and the Women’s Justice Institute in honor of Domestic Violence Awareness Month, the women at Logan prison tell their own stories, in their own words. They wear purple scarves and make up. “This month is our month,” they proclaim. They tell a different side of domestic violence. They are survivors of domestic violence who, in some cases, are in prison because they killed their abusers. Poetry is a cathartic response to their incarceration. As one of the women states, “Today I take the band-aid off so I can heal.” These women are kept behind walls away from the rest of us, but ask that we see them— “Look At Me.” If these women can fight for freedom, then so can we.

We also have to take off the band-aid—the feeling that by putting people in prison we can fix our social problems—and expose the festering wound on the soul of the nation that is mass incarceration. We must envision a view of justice that repairs harm and restores individuals to their full humanity. We still have a long way to go. But we have to hold out the hope that together we can all get free. 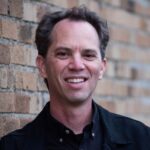 Brian Dolinar, Ph.D. is an independent journalist who writes about issues of mass incarceration. His articles have appeared at In These Times, Prison Legal News, and Truthout. He is author of The Black Cultural Front: Black Writers and Artists of the Depression Generation (University Press of Mississippi, 2012) and editor of The Negro in Illinois: The WPA Papers (University of Illinois Press, 2013). He has taught history and African American Studies at the University of Illinois at Urbana-Champaign.