“What does a just society look like to you?”

This question spurred reflective and restorative conversation among residents from Bloomington-Normal, Carbondale, Chicago, Decatur, Galesburg, East St. Louis, and Urbana-Champaign, who shared their experiences with the carceral system in their home communities and statewide. Sifting through hours of Zoom recordings, filmmakers at independent film production company VAM STUDIO weaved together the accounts of dozens of interview subjects and produced the compelling storyline in our Visions of Justice series.

Jordan Phelps, co-founder of VAM STUDIO and Visions of Justice cinematographer and editor, traveled to cities and towns across the state to film on-location for the project, including many local prisons and jails. He found himself filled with unease with a “raised heartbeat” while driving up to the facilities.

“My partner Vincent (founder of VAM STUDIO) was going to come originally to shoot footage with me. Him being a person of color, I had to kind of tell him that I wasn’t comfortable with that, I didn’t want there to be an issue where we were pulling up to this prison with a camera. It just made me have to look at things a little bit differently for something that would be simple to do on any other production.”

Visions of Justice was unique to any project Phelps had worked on before. VAM prides themselves on their mission of supporting the underrepresented voices of artists and subjects who identify as POC, queer, trans, and/or women. Their mission often leads them to work on projects focused on serious and profound topics. Visions of Justice, however, was the first time the production company had worked directly on the issue of mass incarceration. It was also the first time they worked on a year-long project. The unusual circumstances that the Visions of Justice project presented challenged Phelps and the entire VAM team emotionally and creatively.

Phelps, who knew a lot about injustice from being a witness to the system daily, found the emotional toll of the project to be an unexpected challenge. Working with hours of heavy footage for an extended period of time was difficult. It taught him to implement better boundaries with his work to maintain mental and emotional health.

“As an editor, 60-plus hours of very heavy content started to affect me after a while. I have learned during this process that living with this subject matter for over a year, and working on it almost daily starts to wear on you. So knowing when I needed to take a break or take a breather, I definitely learned about my own personal endurance as an editor emotionally and mentally.”

The production process began in the midst of COVID-19 lockdowns. This unforeseen constraint posed difficulties for the filmmaker who had to film subjects while following social distancing guidelines rather than in person. Phelps was surprised by how well the video chat medium worked for the intimate subject matter being discussed in the series.

“I think I was really surprised, regardless of camera and audio quality, to capture really genuine and authentic moments from them. I think, had we been in the room with lights and cameras on them, there would have been a very different vibe in things they were comfortable enough to talk about—we were asking them very serious questions.”

His work with Zoom footage on this project inspired Phelps to consider using the medium in future projects should the medium lend itself to the topic.

While working with remote interview subjects was challenging enough, one film in the series required even more creative innovation, as the subjects were not allowed to be recorded with video or audio. The four people interviewed for Visions of Justice: Galesburg are currently incarcerated at Hill Correctional Center. The interviewees—Brandon, Brian, Cincere, and Omar—could only be interviewed through email.

Despite the obstacles this presented, Phelps found Visions of Justice: Galesburg to be one of the most fascinating films in the series to work on.

“I was really inspired by the writings by the men at Hill Correctional Center since they are the only subjects that we worked with who are currently incarcerated. I think [interviewing through email] gave them the space and the time to flesh out their ideas in an incredibly beautiful way.”

Visions of Justice: Galesburg recounts the personal stories of these four men who are currently serving long-term sentences at Hill CC. Envisioning Justice Fellow Meredith Nnoka, who led the project, was introduced to the interviewees in the video through Brandon Wyatt, a long-time Envisioning Justice collaborator and a member of our 2021 Artist & Humanist Commissions cohort.

In the weeks leading up to the interviews, Nnoka built a rapport with the men through email before sending them each four interview questions. Starting with a warm-up question using a James Baldwin quote from his short story “Sonny’s Blues,” she asked the men to share stories from their own lives. The men responded to her questions with pages of insightful testaments.

Telling their stories in a visually compelling way required innovation on the part of Phelps and the other VAM filmmakers. Realizing the emails alone would not translate well into a cinematic format, the filmmakers had to collaborate with other creatives to bring Brandon, Brian, Cincere, and Omar’s stories to life. They partnered with Laura Chow Reeve of Radical Roadmaps, who created engaging animations for the film. The filmmakers then brought in voice actors, lending a human voice to recount the stories the men shared through email. 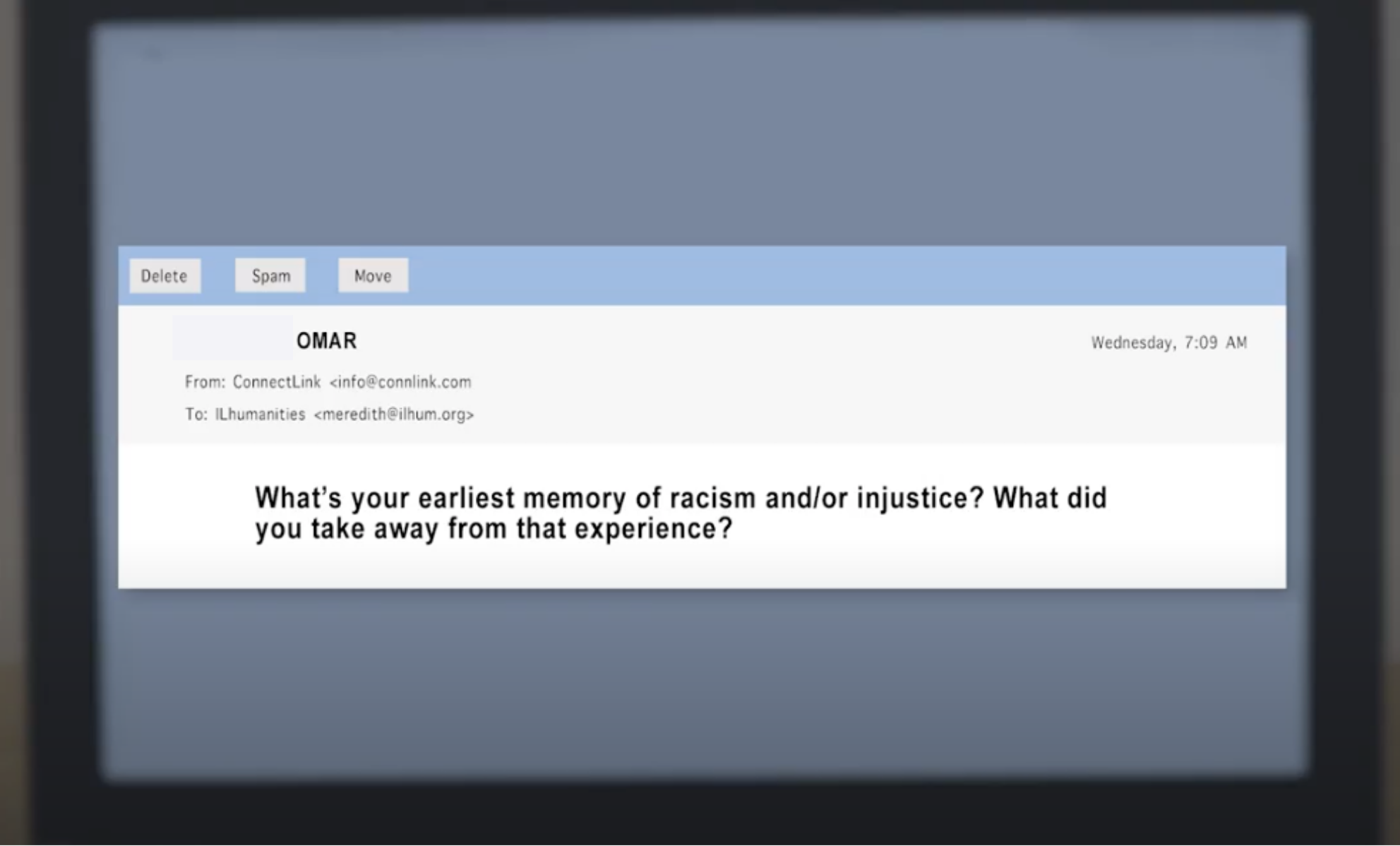 “Every single one of the men we talked to and received writings from was profound, beautifully written and very poetic at times—it almost sounded like a monologue. For us to take that and have them represented with our voice actors and give them some animation is definitely a medium I will take with me in the future as just a really interesting way to tell a story in a way I haven’t done before.”

Through creative innovation and collaboration, the filmmakers were able to overcome the obstacles the production of Visions of Justice: Galesburg posed, ultimately leaving the project with new storytelling strategies in their creative toolbox.

Phelps began production on Visions of Justice struck by the vast differences in infrastructure among the seven key communities highlighted in this project. Despite the differences among all the communities, he noticed consistency among stories highlighting experiences with the carceral system being shared by residents across the state.

“The fact that beneath the surface all of these communities are dealing with the same issue of this massive prison industrial complex and operating under a lot of corruption in the justice system is very telling and new to me.”

Although working on this project had its hurdles for Phelps, he knew that telling these stories visually was an important way to promote justice among people impacted by the carceral system.

“I think in a small way, amplifying those voices is our way of promoting justice as we see it.”

Throughout our interview, Phelps gave thanks to people who helped to support the production of the Visions of Justice series: Assistant Editor Ellie Hall for all of her help throughout the production process, Meredith Nnoka for an incredible job conducting interviews, and Illinois Humanities for the powerful work that is being done with the Envisioning Justice program.