Listen to the conversation…

Brooks is a kid from Chicago, a high schooler, and one of this year’s winners of the Gwendolyn Brook’s Youth Poetry Awards. His poem is called “Emmet Wore His Father’s Ring”, and if you haven’t read it, consider checking out his performance from the 2021 Gwendolyn Brooks Youth Poetry Awards. I spoke to Brooks about his influences, inspirations, and motivations in writing his piece.

Brooks is a slam poet. “Slam” is a form of poetry that lends itself towards vocal performance and in some cases competition. He’s also a member of the Rebirth Poetry Ensemble, a Chicago-based team of youth slam poets. This is all to say that poetry was a huge part of Lansana’s family ethos. He started writing at 9 or 10 and hasn’t stopped since.

His poem was inspired by a prompt from his coaches at the Rebirth Poetry Ensemble. He was asked to write about a figure from the Civil Rights movement. He chose Emmet Till. Brooks spoke to me about how important the story of Emmet Till was. Through his poetry, he wanted to tell the tragic story of Emmet’s life, beginning with his father.

When writing, however, Lansana didn’t want to just focus on Emmet Till or his family. Instead, Lansana framed his piece around a family heirloom, a ring Emmet Till wore.

“Not a lot of people really know about the ring itself,” Brooks said, “…so I wanted to write a poem about what people don’t really know instead of telling them information that they already know from the start.”

When we discussed how he viewed his piece, Brooks described it as “dark”, and “tense”. Those feelings came out in his performance, he described his process to me “I was just trying to give feeling to it… Some of the stuff that happened with it is like really sad, and some parts I wanted it to feel sadder…” At the same time, Lansana touched on how he tapped into the anger people must have felt when Emmet Till’s murder was first published.

Traumatic emotions are at the forefront in Lansana’s piece, and yet he spoke on how his poem was structured like a nursery rhyme, harkening to children’s songs like “London Bridge is Falling Down”. The combination of the dark nature of Emmet Till’s story with this nostalgic lullaby instills an image of a childhood ruined by the darkness of the adult world. Emmet Till was only 14 when he was murdered.

Lansana described his poem as “An everlasting process”, a story that keeps happening. In the same way that lines in the poem repeat themselves, the events that they detail also become cyclical. In this poem, the phrase “history repeats itself” is crucial.

Lansana is a young poet growing up in 2021, and yet the story of Emmet Till is relevant to him today. With his powerful storytelling, historical flare, and creative writing style, expect to look out for this young poet in the bookstores of the future! His poem, along with the rest of the winners for the Gwendolyn Brooks Youth Poetry Awards, is available on the Illinois Humanities site: ilhumanities.org/poetry. 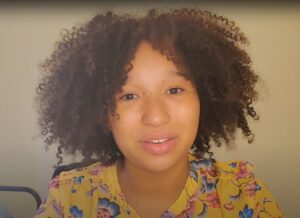 Aanika is entering her sophomore year at Drake College where she is majoring in Creative Writing.

To learn more about Aanika, check out this 2020 interview with her: On Resilience.

In honor of the centennial of the birth of Illinois Poet Laureate Gwendolyn Brooks, in 2017, Illinois Humanities partnered with Our Miss Brooks 100, Brooks Permissions, Poetry Foundation, and the Reva and David Logan Center for the Arts to bring back the youth poetry awards that Ms. Brooks ran from 1970-2000. In 2021-2022, Illinois Humanities is partnering with the Poetry Foundation, Brooks Permissions, and UChicago Arts to host this year’s Gwendolyn Brooks Youth Poetry Awards (GBYPA). We will begin accepting submissions for the Sixth Annual Gwendolyn Brooks Poetry Awards in late-October 2021 with a mid-May 2022 deadline. Learn more