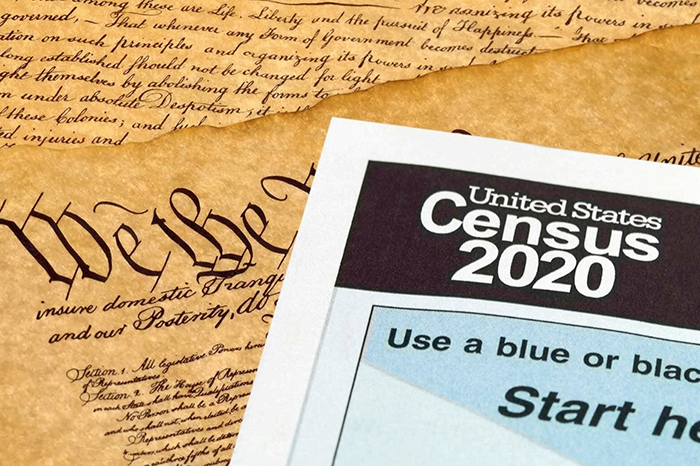 Article 1, Section 2, of the Constitution calls upon us to count every living person in the United States and to use that information to inform representation in the Congress. The Constitution tells us to count; the humanities help us understand what the numbers mean.

The very act of “being counted” is a form of civic engagement. Many people are unaware that the Illinois 2020 count resulted from a powerful, civic infrastructure created specifically to support participation by traditionally “hard to count” populations. Thirty-one regional intermediaries organized and worked with 400+ local organizations that included nonprofits, libraries, and municipal governments to undertake Census outreach, education, and questionnaire assistance across the state, an effort documented in the “Make It Count” report from the Great Cities Institute and detailed archive of this organizing effort. 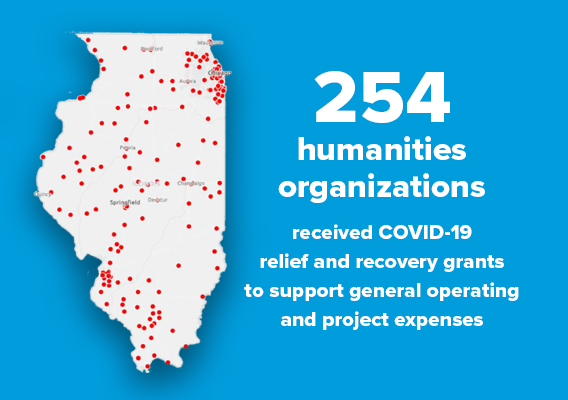 We know how critical it is to bolster our state’s civic and cultural infrastructure. At a time when the impacts of COVID-19 continue to devastate communities across the state, Illinois Humanities is awarding its largest grant pool in the organization’s history for pandemic relief and recovery: $1.4 million to 254 organizations in 72 counties.

This round of grants – which combines funding from the National Endowment for the Humanities received through the American Rescue Plan Act with private donations – builds on lessons learned during 2020 funding relief efforts detailed in this report.

These 2021 awards support public humanities organizations in communities whose residents have been particularly hard hit by the pandemic, and which are often by-passed by traditional funding streams due to their size, organizational capacity, or geographic location. I am particularly grateful to our staff, board, and volunteer readers who did a tremendous job shepherding proposals and moving this initiative forward with care and urgency. We are bolstering this grant making effort with significant community and capacity building workshops in the year ahead because creating a cultural infrastructure is going to be key to ensure that we not only reopen but we continue to be resilient as a sector.

Amongst the things the 2020 Census reveals about us as a state is that our Latinx population is becoming the largest racial or ethnic group in Chicago, Cook County, and in Illinois. That said, the implication that Latinxs are “new” immigrants is incorrect. Mexican Americans were amongst the early migrant groups to Illinois, and Latinxs have been part of the fabric of Illinois since the late 1890s, migrating in particular, in tandem with expansion of the railroad system in Illinois. These early immigrants were instrumental in shaping Illinois as a power center for rail, agriculture, culture, and factory work.

If you’re thinking about finding a way to celebrate Latinx Heritage Month, which runs through October 15, these are great starting points.

And if you’d like to bring a humanist to you, our current roster of Road Scholars features two presenters who focus on Latinx culture and history. Dr. Catalina Maria Johnson is offering programs entitled “Latin Hip Hop as a New Poetry” and “Latinos in Illinois and the USA: Music as a Cultural Heritage”; Henry Cervantes shares performances honoring the tradition of La Danza De Los Concheros. Road Scholars travel around using the humanities to tell stories about communities in Illinois often otherwise forgotten, overlooked or unknown. Applications are currently open to nonprofits in Illinois who want to book Road Scholar presentation for 2022. 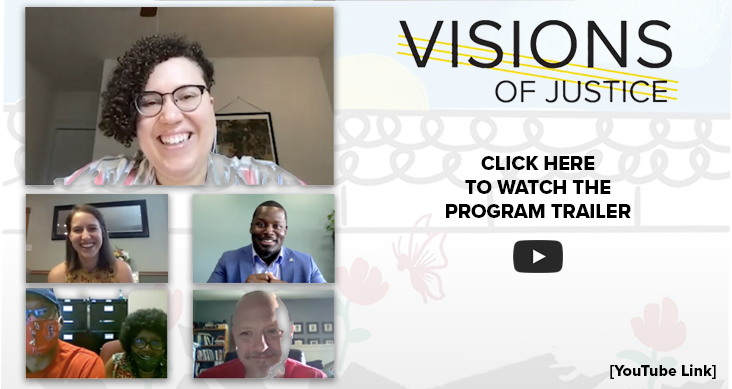 People who are incarcerated are, most often, “counted” for the Census in the places where they are incarcerated, a policy that can give an “outsized” impact on towns in which prisons are located, as highlighted in this story from WBEZ.

Although incarcerated people can be counted in the census, they cannot vote while serving time. To further consider questions of equity and justice we invite you to experience Visions of Justice, an eight-part video series produced by Illinois Humanities in partnership with VAM Studio, featuring interviews with artists, organizers, and system-impacted individuals throughout Illinois who critically examine the criminal legal system, explore its impacts on their communities, and propose what would need to change to create a society that is just and restorative for all.

Beginning on Friday, September 24, we will partner with local organizations to premiere the videos in a series of virtual screenings and conversations in Bloomington-Normal, Carbondale, Chicago, Decatur, East St. Louis, Galesburg, and Urbana-Champaign. Each video premiere will be followed by a panel discussion with local residents and facilitated conversation with the audience. The series will culminate with the premiere of the statewide edition, Visions of Justice: Illinois, on Nov. 18, 2021 – I hope you’ll save the date and be part of the conversation. Click here for the Visions of Justice Screening and Conversation Schedule. In the meantime, if you’d like to read more about this series and the questions driving it, check out this powerful blog post by our Envisioning Justice Fellow, Meredith Nnoka.

Voices and Votes: Democracy in America is a touring exhibit that examines questions stemming from the leap of faith taken by American revolutionaries who established a government that entrusted the power of the nation not in a monarchy but in its citizens. Who has the right to vote? What are the freedoms and responsibilities of citizens? Whose voices are heard? Illinois Humanities is honored to sponsor a complementary traveling exhibition, the Illinois Freedom Project, exploring questions at the heart of the struggle for freedom by and for Black people in Illinois. These exhibits were designed to travel to small towns around Illinois and each host site develops free public programs rooted in local history and events. The exhibits opened in early July, and are currently in Salem, IL, at the Bryan Bennet Library. To see the schedule for when the exhibits will be in and around Savannah, Jacksonville, Clinton and Murphysboro, and Carbondale, visit our exhibit page, here. 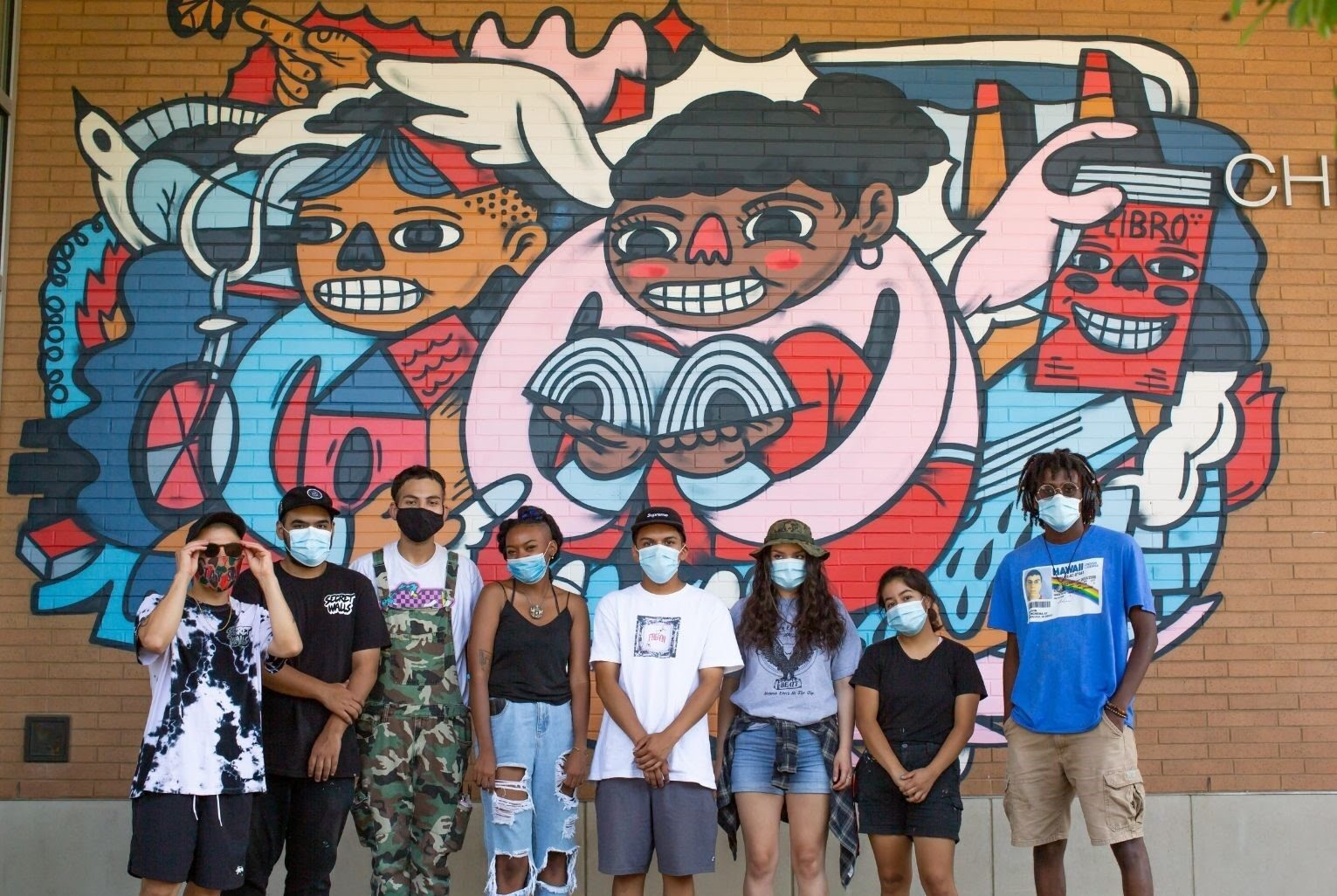 Illinois is the most populous state in the Midwest; we’ve got 12 million residents, 4.8 million households. We are just beginning to digest the 2020 Census data – and more information will come later this spring. One thing is clear: Illinois, like the country overall, continues to grow more diverse, multiracial, and urban. In the words of one of my favorite demographers, Rob Paral, our state “reflects the diversity and changing demographics of the nation.”

It’s important to remember that the Census “numbers” really are people: the numbers illuminate the places they live, the complex nuances of identity and change over time. It is not lost on us at Illinois Humanities that the Census has been a tool to support civil rights, as well as inequity, disenfranchisement, and segregation. Asking questions about what the data means (and what it leaves out) may be as important as knowing what is changing.

As we head into fall, Illinois Humanities will continue to offer free public programs (like Road Scholars, Envisioning Justice, Museums on Main Street), Grants, and Education that can help strengthen the civic fabric we’ll need to make sense of the Census in ways that help us create a more just and equitable state for us all. We hope you’ll join us.

p.s. Also check out Rebuild Foundation’s contribution to the Toward Common Cause: Art, Social Change, and the MacArthur Fellows Program at 40 exhibition at the Stony Island Arts Bank (where Illinois Humanities has an office), which is open to the public Sundays from 12 pm – 6 pm. Public tours of the Bank will commence at 12:15 pm every Sunday. This exhibition explores the question of race and includes pieces by MacArthur Fellows Carrie Mae Weems, Kerry James Marshall, Gary Hill, Whitfield Lovell, Trevor Paglen, Deborah Willis, Dawoud Bey, Fred Wilson and Nicole Eisenman.

Illinois Humanities, the Illinois affiliate of the National Endowment for the Humanities, is a statewide nonprofit organization that activates the humanities through free public programs, grants, and educational opportunities that foster reflection, spark conversation, build community, and strengthen civic engagement. We provide free, high-quality humanities experiences throughout Illinois, particularly for communities of color, individuals living on low incomes, counties and towns in rural areas, small arts and cultural organizations, and communities highly impacted by mass incarceration.