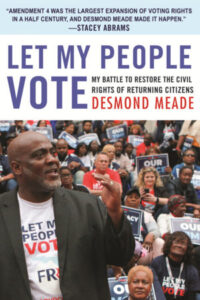 CHICAGO – On Wednesday, July 21, Illinois Humanities presents Love Will Win the Day: A Conversation with Desmond Meade, hosted by its Envisioning Justice Initiative. The free online program presents an intimate discussion of the celebrated activist and author’s life and work explored in his new book, Let My People Vote: My Battle to Restore the Civil Rights of Returning Citizens.

“As calls for criminal justice reform intensify throughout Illinois and the United States, Desmond’s story offers many lessons for those seeking to reimagine current approaches to justice and accountability,” said Executive Director Gabrielle Lyon. Tyreece Williams, Program Manager of Envisioning Justice, will join Meade in conversation as the pair delve into the themes of Let My People Vote, such as Meade’s first-hand experiences with the criminal legal system and his ongoing fight for returning citizens’ rights to fully reenter society.

“Nothing speaks more to citizenship than being able to vote, and the effort to restore voting rights to people who were convicted of felonies speaks not only to creating a more vibrant democracy, but also to the humanity in all of us,” said Meade.

Recognized by Time Magazine as one of the 100 Most Influential People in the World in 2019, Desmond Meade is a formerly homeless returning citizen who overcame many obstacles to become the President of the Florida Rights Restoration Coalition (FRRC), Chair of Floridians for a Fair Democracy, and a graduate of Florida International University College of Law. His work as the President and Executive Director of the FRRC led to a historic victory in 2018 with the successful passage of Amendment 4, a grassroots citizens’ initiative that restored voting rights to over 1.4 million Floridians with past felony convictions. Amendment 4 represented the single largest expansion of voting rights in the United States in half a century and brought an end to 150 years of a Jim Crow-era law in Florida.

“We’re honored to have Desmond joining our community in conversation,” said Williams. “It’s through our shared stories – as Desmond has recorded his own for us all to benefit – that we can come to understand the innumerable harms of mass incarceration and reimagine what justice can look like.”

Since 2017, Envisioning Justice’s public programs have used the arts and humanities as mediums to facilitate civic dialogue about the impacts of mass incarceration in Illinois. Love Will Win the Day will build on these conversations, further examining the themes of reentry, justice, and accountability explored in the latest installment of the Illinois Humanities-produced Envisioning Justice Rapid Response series, Rapid Response: RE-ENTRY, on July 14. Rapid Response was created in May of 2020 as a virtual platform for the initiative’s programming, blending the humanities, arts, and critical reflection into a free online video series centering the initiative’s collaborators and partners working in system-impacted communities. Watch the latest from the Envisioning Justice Rapid Response series here.

Love Will Win the Day: A Conversation with Desmond Meade will take place Wednesday, July 21 at 7:00 p.m. (CDT). Audiences can attend the event on Zoom to participate in a live Q&A with Meade. The program will also stream live on the Illinois Humanities YouTube channel. For more information: bit.ly/2Vd5oGq

This program is presented in partnership with Women and Children First, a feminist bookstore serving the Chicago area since 1979. This program is also made possible through the generous support of the Art for Justice Fund, which is a sponsored project of Rockefeller Philanthropy Advisors; and the Andrew W. Mellon Foundation.

About Illinois Humanities
Illinois Humanities, the Illinois affiliate of the National Endowment for the Humanities, is a statewide nonprofit organization that activates the humanities through free public programs, grants, and educational opportunities that foster reflection, spark conversation, build community, and strengthen civic engagement. We provide free, high-quality humanities experiences throughout Illinois, particularly for communities of color, individuals living on low incomes, counties and towns in rural areas, small arts and cultural organizations, and communities highly impacted by mass incarceration. Founded in 1974, Illinois Humanities is supported by state, federal, and private funds. Learn more at ilhumanities.org and on Facebook, Twitter, Instagram, and LinkedIn @ILHumanities.

About Envisioning Justice
Envisioning Justice leverages the arts and humanities to envision alternatives to the enduring injustice of mass incarceration. This Illinois Humanities initiative works with communities and people impacted by mass incarceration to spark conversation and illuminate community-based strategies that address our unjust criminal legal system. Learn more at ilhumanities.org/programs/envisioning-justice.