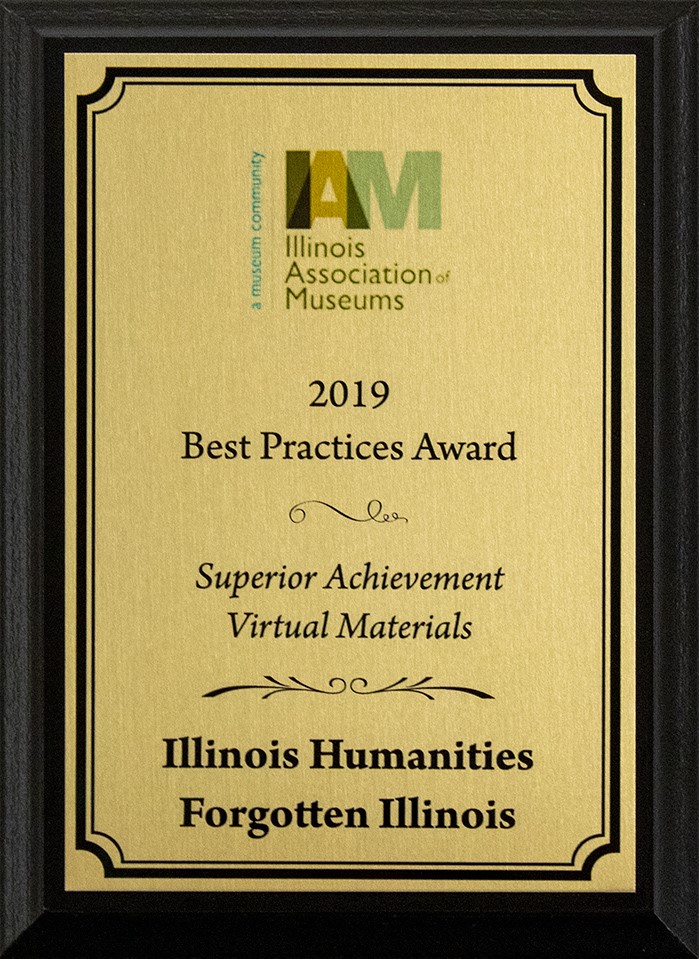 The celebrated project was a collaboration between IH’s grants program and Jessica DeSpain and Ben Ostermeier of Southern Illinois University Edwardsville’s IRIS Center, which produced a digital gallery of IH-funded projects. The Illinois State Historical Society also partnered on the project, helping to publicize the opportunity as widely as possible, evaluate and select proposals, and disseminate the products of the initiative. Scholars Jeanne Schultz Angel and Jim Nowlan wrote essays meant to provide thematic connections across the 20 projects.

To celebrate the state’s 200th anniversary, IH hosted three grants cycles in 2018 responding to the prompt “What can lesser known features of Illinois history tell us about the ever-evolving identity of our state?” Grants were awarded for research projects, artistic interpretation of history, and classroom-based projects.

In response, dozens of groups applied for funding. Over the course of 2018, grants were awarded to 20 projects, including a film on the history of Mexican railroad boxcar communities, an oral history of Forgottonia (a 16-county area in western Illinois), a publication on French Colonial Fort de Chartres, a documentary record on the hanging of the first woman in Illinois, a film on the underground railroad in Illinois, and a project commemorating the Chicago race riots of 1919, among others. The complete list of 20 projects appears below.

“The Illinois Bicentennial seemed an ideal time to support public humanities projects illuminating aspects of the culture and history of our state that might not appear prominently in conventional descriptions of it but nevertheless indicate something significant about its complex identity,” said Matt Meacham, program manager, statewide engagement at Illinois Humanities. “We were pleased that organizations located throughout Illinois submitted proposals and that their projects were so varied in both content and format.”

The projects funded through the initiative are still coming to fruition. The National Vegetarian Museum launched its digital story map of vegetarianism November 14, 2019 at Native Foods on Belmont Avenue in Chicago. The Chicago Race Riot of 1919 Commemoration Project was featured in an article in Another Chicago magazine.

In addition to this award, two partners of Illinois Humanities, the Atlanta Museum in Atlanta and the DeKalb County History Center in Sycamore, also received Illinois Association of Museums awards. Both were recognized for the locally focused companion exhibitions that they produced during their participation in the 2018-19 tour of Crossroads: Change in Rural America, a Museum on Main Street exhibition from the Smithsonian Institution and Illinois Humanities. The Atlanta Museum’s companion exhibit examined how school consolidation in the Atlanta and Eminence townships from the 1940s to the present has influenced local social dynamics and community identity. The DeKalb County History Center’s exhibit identified developments within DeKalb County, past and present, that reflect the national trends described in each section of Crossroads. We heartily congratulate our friends in Atlanta and DeKalb County on their well-deserved success!