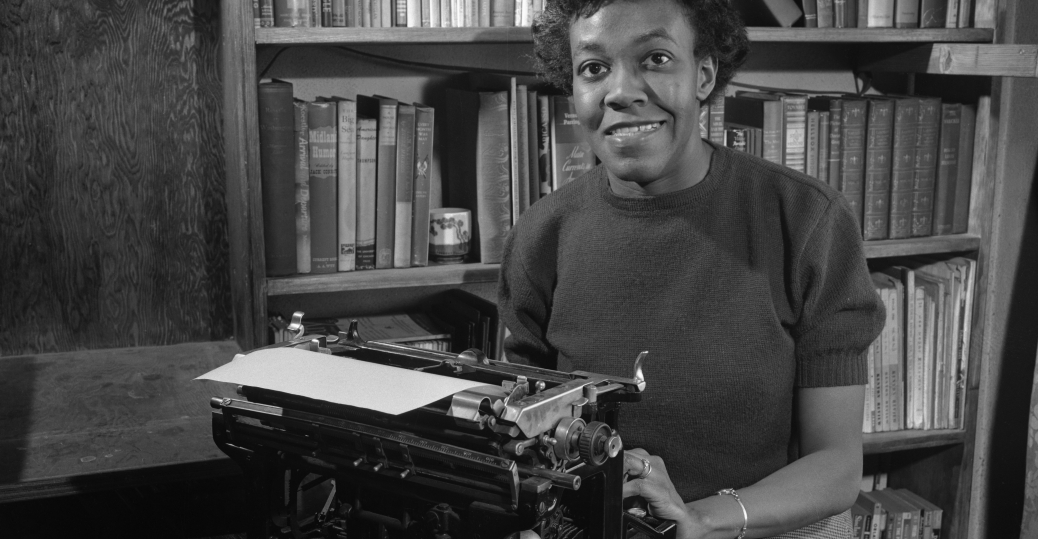 Gwendolyn Brooks summed up the contest best in a note from 1977: “All the children who entered the contest are winners . . . . They worked hard. They created. And that is what is important.” With this spirit in mind, we’d like to thank everyone who submitted a poem. We’d also like to thank all of the teachers, librarians, parents, afterschool mentors, and others who supported and nurtured young writers throughout Illinois: you’re supporting the next generation of poets in Illinois!

Below are photos from the Gwendolyn Brooks archive at the University of Illinois Urbana-Champaign’s Rare Book and Manuscript Library and more information on the history of the Awards.

The Youth Poetry Awards are first mentioned in a press release dated October 8, 1969. For the next 30 years, Gwendolyn Brooks, the poet laureate of Illinois, would personally steward the awards—writing guidelines, sending out flyers to school across the state, supervising the selection process, notifying winners, speaking at the awards ceremony and, most importantly, corresponding with the hundreds of student poets, parents, teachers, and administrators impacted by this experience. The New York Times would later report that Brooks spent $2,000 or more of her own income annually on the Awards.

Over the years, the Awards would expand to honor works by students from kindergarten through college before finally settling upon celebrating K-12 poets. From 1976 onward, the University of Chicago hosted an annual awards ceremony in which these students were publicly acknowledged.

In 1987 the Significant Illinois Poets Award ceremony honored both students and Miss Brooks on her 70th birthday with readings by 32 notable poets, including Paul Carroll, David Hernandez, Angela Jackson, Sandra Jackson, Haki Madhubuti, and Henry Blakely, Brooks’s husband. Among the poets reading that afternoon was Sandra Cisneros, who had cultivated many young writers through her years at the Latino Youth Alternative High School in Chicago and who would later remember the day as “a rare Sunday. A sincere Sunday. From someone both sincere and rare.” That same year Elsie Adams, whose daughter had been mentored by Brooks, wrote to thank the poet for personifying “the artist who is unselfish with her talent; one who ‘gives’ bountifully, and therefore ‘reaps’ bountifully. You believe that we owe our sisters and brothers; you fulfill that debt constantly.”

Why did Brooks create the Youth Poetry Awards in the first place?

In a press release dated May 18, 1970, she writes of first, “a continuing interest in the health of poetry, and second, my belief that a ‘poet laureate’ should do more than wear a crown – should be of service to the young.”

In selecting winning poems over the course of three decades, Brooks searched for “vitality, language surprises, bright contemporaneity, technical excellence, evidence of suitability for the ‘long haul” but did not require “all such virtues in combination.”

While sticking to this criteria, the guidelines for the 1979 contest changed slightly to encourage poems that both “rhyme or rhyme less.” This change may have come in response to a letter from a thirteen-year-old poet written to Brooks a year prior. In the letter, the poet, who is deaf, writes that his entry was rejected by his teachers because its lines didn’t rhyme even though he’d noticed that the lines of poems by Carl Sandburg, Brooks’s predecessor as Illinois Poet Laureate, didn’t rhyme as well. In the margin to the letter, Brooks scribbled “These teachers are ‘criminals,’” reflecting her sustained belief in taking students seriously as writers and as individuals.

This belief turns up in remarks she made at the final awards ceremony she attended before her death in 2000. She says to those in the audience that “when you have experienced these upcoming poems you’ll identify new reasons for admiring your children and teens . . . . Much of the time you know them . . . . Not always do you know them.” She urges parents and teachers, then and now, “Listen to these phrases, these deliciously strange constructions. WOW. WOW.”

Images from the archives