UPTOWN — About 20 current or former residents gathered Thursday at the St. Francis House for a candid conversation about neighborhood issues.

Uptown Speaks, which met at 4652 N. Kenmore Ave., is one of two Illinois Speaks programs organized by Illinois Humanities in Chicago.

Illinois Speaks “seeks to promote discussions within and across communities about issues impacting our lives as a means of strengthening the democratic process,” according to its website.

The inaugural meeting’s topic was community policing, and featured Alan Mills, of Uptown People’s Law Center, and Monica Cosby, who was recently released from Logan Correctional Center in Lincoln, as guest speakers.

“In Uptown, for decades, the police have not played a sort of neutral ‘law and order’ role,” Mills said. “They, instead, are very much a part of the gentrification that is going on in Chicago in general, not just Uptown.” 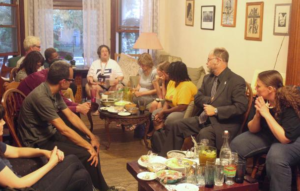 Mills’ remarks focused on Uptown’s diverse history, and the role that changes in community policing in the neighborhood has played in shaping the changing face of the neighborhood.

He suggested that the Uptown of today needs to learn from its own history.

In the early 70s, the neighborhood was home to the original Rainbow Coalition (before it became Rainbow PUSH) which brought together various social organizations representing a diverse group of ethnicities including the Black Panthers, the Young Lords and the Young Patriots, Mills said.

When Mills came to Uptown in 1978, he said the community had one of the highest concentrations of poor white people living in private housing, which today is “condos or much higher rental property.” Much of the community’s diversity remains thanks to the coalition’s fight to ensure low-income housing remained available in Uptown, he said.

“Throughout that period, the police and the criminal justice system have very much played a negative, destabilizing role,” Mills said. “If you want to displace poor people out of a community you destroy the ties that exist among them.

To make a community safer, you must rebuild the ties that have been severed between the community and “meetings like this are a good start,” said Mills.

“I always think of there being a battle in Uptown as to whether or not ‘the community’ means buildings within a certain geographic area, or is it the people?” he said. “I firmly believe the community is made up of people, not buildings, but the fight is over who controls the land.”

Uptown Speaks will meet on the third Thursday of every month and plans to cover a range of diverse issues affecting the community, said Trisha Snowden, who organized the meeting.