Illinois Speaks is our new community-driven, small-group conversation program. We’ve started having some events from our first cohort and we’ve been excited to see what a variety of groups are doing. Here’s a brief look at three of our first Illinois Speaks events. If you’re interested in hosting a conversation in your community, let us know! 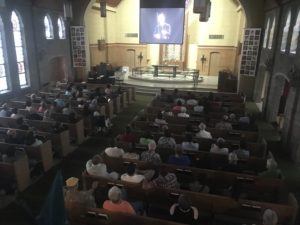 On Tuesday, June 14, the Japanese American Citizens League hosted the first Illinois Speaks dialogue supported with an Illinois Humanities micro-grant. Held at the Christ Church of Chicago, the discussion featured a free screening of The Manzanar Fishing Club and a Q&A with director Cory Shiozaki. Expecting some 30-50 attendees, the organizers were surprised when 135 people showed up.

The goal was to educate attendees on the incarceration of Japanese Americans during WWII and through discussion to connect these stories to current issues. The film focuses on the historical backdrop on Japanese American incarceration during WWII, but also tells the story of men and women who would sneak out of the Manzanar concentration camp to go fishing and then return to the barbed wire enclosure. Shiozaki, a third-generation American and licensed fishing guide and docent at the Manzanar National Historic Site, said that growing up his parents never really liked to talk about their experience in the camps, because it was a difficult experience to share.

During the discussion, several former internees shared about their experiences and how important it was to them that this story is being told. Cory asked for former internees to stand and be acknowledged; there were a half dozen former internees there. Attendees commented on how this film relates to current issues of discrimination and oppression including anti-Muslim, anti-immigrant rhetoric. 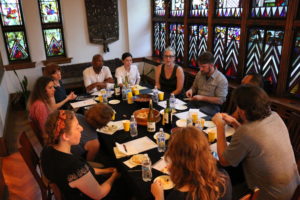 Think of a time when you and/or your organization took its biggest risk. What was the story behind that moment? What was gained or lost in the process?

What are the fears or blocks to taking big or small risks in our lives either as artists and/or educators? What keeps us from taking bolder steps?

What’s your next big risk? What are the conditions you need to take that next big risk in your own practice and/or in your role in your organization?

Some of the highlights included the following quotes:

At the end of the dialogue, participants were asked to pull the name of another member of the group with the challenge to follow up with that person in the next month to ‘check in’ on the role that risk was playing in their lives. 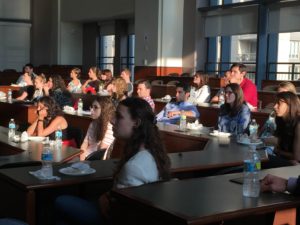 Kudos to GCFD for doing a great job! The dialogue was fast paced and offered everyone who wanted a chance to speak up. This was just the first of four Illinois Humanities-sponsored dialogues; we look forward to future ones being just as compelling.