This article appeared in The Key Reporter on June 20, 2016. You may access the original text here. 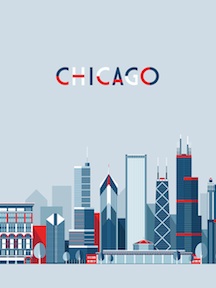 Phi Beta Kappa honored an entire city for the first time in its 240-year history on May 10 when the Society recognized the City of Chicago as its inaugural Arts & Sciences City of Distinction. The award is designed to showcase metropolitan areas with exceptional artistic vitality, cultural vibrancy, and scientific engagement.

At the celebratory reception co-hosted by the Phi Beta Kappa Association of the Chicago Area, Phi Beta Kappa gave $5,000 prizes to four exemplary local organizations that build creative connections with new and diverse audiences in the arts, humanities, natural sciences, and mathematics. These outstanding recipients are:  The University of Chicago’s Arts + Public Life, Odyssey Project at Illinois Humanities, Math Circles of Chicago, and Northwestern University’s Science in Society.

Michelle T. Boone, Chicago’s Commissioner of the Department of Cultural Affairs and Special Events, accepted the Phi Beta Kappa Arts & Sciences Cities of Distinction Award on behalf of the city.

“I’m very happy to receive this honor on behalf of Mayor Rahm Emanuel and the people of Chicago,” said Boone. “The City of Chicago presents hundreds of free cultural programs and supports hundreds of artists and arts organizations annually—all in an effort to enrich Chicago’s artistic vitality and cultural vibrancy.”

“Chicago’s arts sector contributes $2.2 billion annually to our local economy, provides 60,000 jobs and $1.3 billion in household income every year,” added Boone. “For all of these reasons and more, we’re thrilled to be recognized as a City of Distinction.”

Each presenter had just five minutes to explain a key idea in their field of expertise to a crowd of nearly 200 people. The talks covered hot topics ranging from black holes to modern art to Southside Chicago food culture. Videos of the talks are now available for you to enjoy at pbk.org/Chicago.

Anne Tria Wise is the Director of the National Arts & Sciences Initiative at Phi Beta Kappa. She can be reached at (202) 745-3230 or awise@pbk.org.