This notice appeared in The Register-Mail on June 22, 2016. You may access the original text here.

GALESBURG — A history professor will give two talks based on his book on railroad history at the upcoming Railroad Days.

Dr. Simon Cordery is the chair of the history department at Western Illinois University and released his latest book, “The Iron Road in the Prairie State,” earlier this year.

That book will be broken up amongst two talks by him on June 25 at Central Congregational Church, 60 Public Square. The first talk, “The Origin of Illinois Railroads: From Failure to Triumph” starts at 10:30 a.m. on the beginnings of the industry and the first part of his book.
His second talk, “Illinois Railroads in the Twentieth Century: From Profits to Despair and Renaissance” starts at 1:30 p.m. and is on the second half of the book. A book signing will follow both talks. 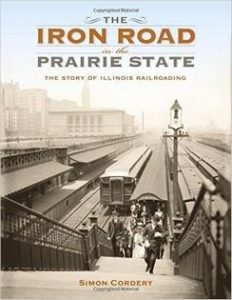 Cordery said the railroad industry seems “to be experiencing something of a temporary decline” as profits are declining, but he expects that to be a momentary dip because this is “such a massive consumer-oriented society that they will bounce back.”

He said the book came from his own desire to assign a book for his class at WIU in 2012 on the history of Illinois railroads, but there wasn’t one. In researching the book, he gave almost 50 talks around the state on railroads through the Illinois Humanities Council’s Road Scholars program, which “subsidizes speakers to go and talk to societies and boards,” Cordery said.

“Galesburg is such a crucial part of the national railroad picture so it features quite large in my talk,” he said.

There will also be tours of the church available June 25, as well as a lunch sale of hamburgers and brats, with proceeds to benefit the church’s building preservation.

“So many times people drive by Central Congregational Church, but have never been inside so we hope some people take the time to come inside and see how really beautiful it is,” she said.