This article appeared in the Clinton Herald on April 20, 2016. You may access the original article here.

The Volunteer Millers at de Immigrant windmill will host the event at the Windmill Cultural Center at 111 10th Ave., Fulton, across from the authentic Dutch windmill. The event is being produced in part by the Illinois Humanities Council’s Road Scholars Speakers Bureau, a program that provides Illinois organizations with affordable, entertaining and thought-provoking humanities events for their communities. 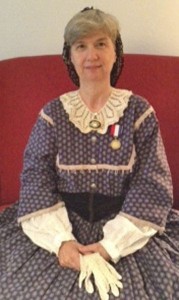 In her 90 years, Clara Barton was a teacher, clerk for the federal government, Civil War nurse, and activist for many causes, but she is probably best known as the founder of the American Red Cross. Through her tenacious leadership, Barton brought the United States a tremendous gift: a volunteer spirit that aimed to help others not only in one’s own community, but across the nation and around the world.

Barton and her band of volunteers brought comfort and aid to millions, including many in Illinois. More than a century later, her dreams and goals remain alive through her organization. Through her first-person portrayal, Barbara Kay brings Barton to life, telling the inspiring story of her many accomplishments.
Barbara Kay is from Glen Carbon, Illinois. She was a high school history teacher in Highland, Illinois, for 30 years and also taught in Missouri and Germany. She earned a BS at Northeast Missouri State University and an MA from Webster University. In 2011, she won the Illinois Society Sons of the American Revolution American History Teacher award. She served as a board member of the Society for Women and the Civil War. She has also portrayed Martha Washington, Mary Todd Lincoln, Dolley Madison and Molly Brown.

The program is free and open to the public. The 2016 Miller programs are sponsored with a grant from the D.S. Flikkema Foundation. Refreshments will be served following the entertainment. The facility is accessible to people with disabilities. For more information, visit the Windmill Cultural Center and de Immigrant Windmill Facebook page or call (815) 589-3925.