This panel was made possible in part by our Community Grants program. A big thanks to Rachel and Hannah for the text.

Over the past couple of years, protests have broken out across the country—in city streets, on college campuses, at political rallies. Most often, coverage of these events focuses on the concrete issues and facts at hand: Who is involved, what are their grievances, and what are their demands? Rarely, though, do these news analyses go further to explore the deeper question of what protest is for.

How does protest fit into our understanding of democratic politics? What is the connection between protest and political change? On Thursday, February 11, The Point magazine brought together a slate of activists and thinkers to address these and other questions.

The Point, a Chicago-based magazine of philosophical writing on contemporary life and culture, recently published their winter 2016 issue, which included a symposium with a series of contributions on the subject of protest. In conjunction with the publication of that issue, the magazine hosted a panel discussion featuring activist and educator Bill Ayers, BYP100 policy chair Janaé Bonsu, and political philosopher Charles W. Mills, with the support of Illinois Humanities. 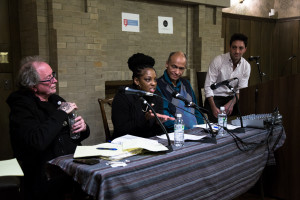 Jon Baskin, founding editor of The Point and moderator of the discussion, began with a challenge from former U.S. Congressman Barney Frank, who argued against demonstrative politics in an excerpt from his book that was republished in the most recent issue of The Point.

In a representative democracy, Frank argues, protest should be secondary to organizing political action within the system—pushing for reforms in local and national legislatures, writing your representatives, rewarding or punishing politicians with votes. A lively discussion followed, with the three panelists giving their own defense of protest as a means of political expression and impetus for change.

Invoking Dr. Martin Luther King, Jr.’s definition of riot as “the language of the unheard,” Bonsu argued that in a context of enduring disenfranchisement, direct action remains a crucial tool. Asked about the recent spate of campus protests, Ayers pushed back against comparisons to his own young organizing, arguing that the “myth” of the Sixties is too often used to undermine present action. Mills offered a considered take on how philosophy might interact with on-the-ground political movements, creating frameworks for change—and how traditional liberalism has fallen short.

Those who weren’t able to attend the event can find a video of the full panel on The Point’s site. There’s also a list of pieces for further study, many of them written, endorsed, or challenged by the panelists. Happy reading!