This article appeared in the Galesburg Register-Mail on February 20, 2016. You can find the original article here. 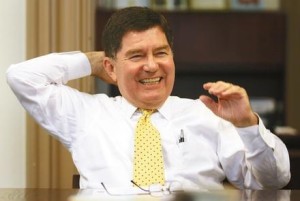 Taylor was the Knox College President from 2001 to 2011, where he received his bachelor’s degree in English in 1963.

The governor’s press office sent the announcement after 5 p.m. Friday, and Taylor was not available for comment.

When he announced his retirement from Knox in 2010, he touted his work to strengthen the finances of the liberal arts college in an article in The Register-Mail.

“The financial house is more secure. We’ve reduced the endowment spending rate and continue to balance the budget,” Taylor said in the article. “This year, while many major colleges and universities had salary freezes and some had reductions and laid off employees, Knox gave 2 percent increases and did not lay off anyone.”

Along with his presidency at Knox, Taylor is a member of Rotary International, is a board member for Illinois Humanities and is a former trustee of the Historic Preservation Agency.

He takes a place on the board which oversees a museum that had been closed for four months due to the state budget impasse.

Earlier this month, Rauner used his amendatory veto powers to reopen the museum he closed if it charges admission instead of allowing visitors in for free.