At the conclusion of the fall semester, Odyssey Project students, faculty, and staff came together to read Lysistrata by Aristophanes in preparation for the release of Spike Lee’s film Chi-Raq (2015). Lysistrata provides the source material for Lee’s tale of epic gun violence and death in the Chicago neighborhood of Englewood. Over 70 students, faculty, and staff from the Odyssey Project attended screenings of the film in December and participated in follow-up discussions of the film and the play. Sherry Williams, a student from Odyssey Project’s South Side site, prepared the following response:

I had some reservations about seeing the movie for several reasons.  CHI-RAQ is NOT a term of endearment given to the Englewood community of Chicago.  The name is an indicator of how the Englewood community is viewed by its residents as a war zone.  Englewood has been referenced as ground zero for many years. Englewood has suffered long term, uninterrupted violence and murder.  Most of my friends know that I was I was born in, raised in Englewood. None mentioned that they desired to see the movie.  Not one friend told me they saw the movie.

I walked into the theatre with my Odyssey Project class totally biased.  Motion pictures have had a large part in demonizing African Americans since inception.  Tackling the subject of Chicago’s ongoing violence in film could prove damaging.  Racial conflict rippled through America following the screening of The Birth of the Nation (1915). Birth of the Nation defined Black males as brutes driven by the desire to rape white women. However truthful the murder statistics are in Englewood, young adult movie-goers may not understand the institutional racism that fuels economic disparity, failing schools, crime, and violence. 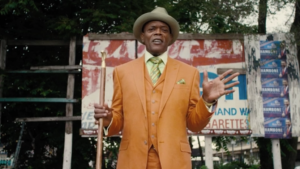 Chi-raq glossed over these issues. The script did provide briefly the crime statistics and profiled the characteristics of criminal behavior. The bulk of the movie mostly sensationalized the male response to the women deciding to use abstinence to galvanize. The male response was a stark reminder of how women are not considered capable of making a decision about their bodies.  The women united to improve their communities without the OK of the males in their lives.  I am not sure if this story line is reflective of the ancient play.  This story angle does provide a truthful and powerful narrative of how women are devalued globally.

Chi-raq characters provided a glimpse of how violence, sex, power, racial constructs, and economics all intersect. Actor John Cusak portrayed Father Pfleigher in a most believable way.  His eulogy at the funeral of “Patti” brought me to tears.  Throughout scenes in the film, I walked through the very neighborhood I was born and raised. The opening scene was at 63rd and Marshfield. I lived at 6012 S. Marshfield from 1971 to 1978. My mom, grandmother, aunts, cousins, and brothers all lived in Englewood until 2005.

It was heartbreaking to follow the camera on blocks I knew well.  My brother lived on 63rd & Elizabeth.  In the film, this was the block that actor Angela Bassett lived and worked in her garden. At St. Sabina, I roller-skated in their gymnasium as a young girl until I was 17. I visited Saint Sabina in 2010 some months after the 2009 murder of Derrion Albert. His mother gave others and me a lapel button with his photograph.  It has been on my desk every since. Mothers and community had gathered at St. Sabina for a prayer service. Each of us present humbly read the names of the 459 murder victims in 2009.

The line to the microphone went around the church and beyond the interior doors. Scenes in Chi-raq were all familiar.  I also saw folks I know in the movie as “extras.”

I cried when I realized that the character Chi-raq was responsible the Patti’s death.

Everyone I have known from childhood to adulthood has been impacted by senseless violence.  My family members and friends have been on the receiving end of gun violence.  One of my cousins, neighbors, and friends all murdered.  Their assailants were caught and are now in jail.  But their jail sentences do not console the pain.

THE VIOLENCE MUST END.