[Nicole Bond is a second-year student in the Odyssey Project, where she and her fellow students have been reading Claudia Rankine’s Citizen. Bond and several other students attended Claudia’s recent event at the Chicago Humanities Festival and here offers a recap.] 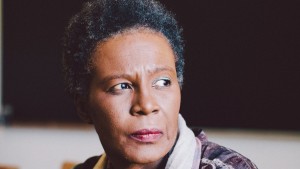 If you donned rain gear instead of a Halloween costume and made it to Northwestern University’s Thorne Auditorium, on this past overcast October 31st afternoon, you too would have been in the company of friends.

The conversation “crawled” to a start as the two exchanged pleasantries in a sort of where do we begin fashion almost veering into Pope L’s conversation, as Claudia opened up the space for him to talk about his artistic work, as it speaks to citizenship and racism in particular. But that’s just the kind of person Rankine is. She doesn’t have to be big or make you appear small to deliver her message. Her message resounds in her quiet way, in the things she says and in the things she does not say, in her smooth mocha Blackness, in her natural hair, in her black utilitarian clothing with a splash of fuchsia-crimson framing her face. Everything about Rankine is poetic.

The conversation gained momentum when Pope posed what he described as a “Charlie Rose” question, leaning in to ask Rankine what is her favorite or was her hardest part of the book? Although Rankine did not identify specific places that she would deem favorites or most difficult, she did say the book allowed her to step inside a moment. She spoke in particular of the Zidane headbutt incident at the 2006 World Cup Final, which she reports on, in Citizen both lyrically and visually. Rankine talked of how lip readers were brought in to analyze the footage to learn what sparked the infamous headbutt birthed from racial discord. So she thought why don’t I step in and read ALL the moments leading up to it… as that is the artist’s job, and is what Rankine does so beautifully. She helps illustrate all the tiny moments that go missing in the face of the larger moment. She distilled the moments of the Zidane incident down to when your own humanity becomes more important than any retribution for misbehaving; when your humanity is being taken. A theme reoccurring often in her book, as she described how a Black woman told her it wasn’t until she read Citizen that she understood clearly all of Serena William’s behavior on the tennis courts. Before reading the book, the woman said she felt Serena Williams was simply acting out and shaming Black folks in so doing.  Rankine likened that sentiment to living life under the shadow of white folk’s gaze.

The conversation was rich with moments from inside the book and from inside the audience as Rankine and Pope opened the floor for questions. The most teachable moment came from an audience participant who asked Rankine to talk about the book cover in which she (the audience participant) described the cover image as a decapitated hoodie. Rankine considered her observation accurate while further explaining most people see the cover and assume it is in response to the Trayvon Martin murder (my word not Rankine’s) but are shocked to learn the decapitated hoodie is a sculpture created in 1993 by artist David Hammons, titled In the Hood – nearly 20 years prior to the Trayvon Martin story.

We adjourned to a long line to have our copies of Citizen: An American Lyric signed. Here Rankine sat poised and patiently spared gentle moments to interact briefly with each one of us who waited. When I reached her I was a little embarrassed by my book, as it was not freshly purchased at the event, but had a broken spine, was riddled with yellow post-it notes, and it too wore a splash of fuchsia-crimson on the cover from traveling in my tote bag on a rainy day next to a red pen, looking just like a well-used bible should look. Rankine put me at ease agreeing with the assistant who presented me, and with countless others that “this is a well-loved, well-read book!”