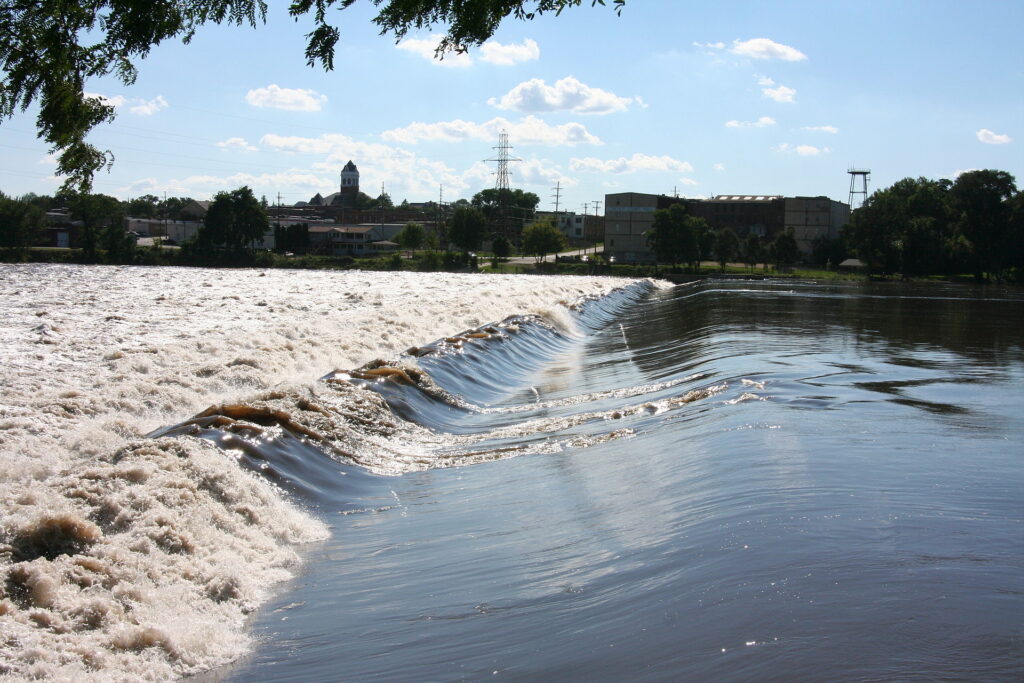 or many communities, the Mississippi River is a double-edged sword in liquid form, providing the basis for their existence yet constantly endangering it.  When we contemplated ways to combine the theme of this year’s Greater St. Louis Humanities Festival, “Community Viability and Vitality,” with that of our next Museum on Main Street exhibition, Water/Ways, the many Illinois and Missouri communities that have wrestled with what St. Louis native T.S. Eliot called the “strong brown god” soon came to mind.

Valmeyer, Illinois, and Pinhook, Missouri, were physically damaged beyond repair in the Mississippi floods of 1993 and 2011, respectively, yet chose to persist as communities.  Valmeyer reestablished itself on higher ground, and Pinhook is working hard toward doing the same.  It seemed to us that the stories of Pinhook and Valmeyer might provide a distinctive viewpoint from which to consider community viability and vitality.

In cooperation with Lewis and Clark Community College’s Mannie Jackson Center for the Humanities, the Missouri Humanities Council, the Smithsonian Institution, and especially the featured communities, we presented “Changing Currents: Valmeyer and Pinhook Reclaim Community After Flooding” on October 2 at the National Great Rivers Research and Education Center in East Alton. A video of the program is available here.

I found moderating the discussion both a privilege and a challenge.  Knowing that the subject matter is deeply personal to Twan, Debra, and Dennis, and admiring their remarkable leadership, I wanted to be sensitive and respectful toward them.  I also believed it important to convey that there are both significant similarities and significant differences between Valmeyer, a mostly white community of about 1,250 residents, and Pinhook, a predominantly African American community of about 50, and that we didn’t intend to imply that the two towns are either somehow equivalent or somehow opposite.

Despite my self-consciousness, the panelists made the conversation compelling.  Dennis, Debra, and Twan eloquently described their communities’ experiences, and Laura and Mary offered insightful analysis and contextualization.

We intended to focus largely on two questions: “What can we learn from the experiences of Valmeyer and Pinhook about the responsibilities of local, state, and federal agencies in ensuring that rural communities can remain viable when disaster strikes?” and “How have these communities drawn upon their cultural strengths in order to maintain their vitality in the face of adversity?”

We did address those questions, but because the scenarios that Pinhook and Valmeyer experienced are complex, it takes considerable time just to explain what happened and establish the basic contexts.  Consequently, we had limited time to discuss broader implications.

I wish we could have talked more about the relative responsibilities of local, state, and federal entities, especially in cases such as that of Pinhook, whose devastation resulted largely from an action of the federal government: the activation of the Birds Point-New Madrid Floodway.  I also wish we could have devoted more attention to environmental, economic, and social questions related to flood control and mitigation (such as those addressed by SIUC’s Imagining Geographies).

Other topics we might have explored had time allowed include Laura’s ongoing research comparing the experiences of southeast Missouri after the 2011 flood and of New Orleans following Katrina with regard to intersections of federal disaster-response policy and local cultural factors, and, on a lighter yet thought-provoking note, the musical that was written about Valmeyer and the community’s reactions to it.

Nevertheless, the discussion was substantial, and I hope we can identify opportunities to continue it in such a way that Pinhook, Valmeyer, and other communities might somehow benefit.  (And I’m already building up an appetite for Pinhook Day: May 28.)