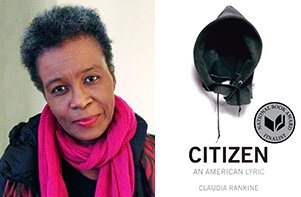 This semester in the Odyssey Project’s second year course we are examining ideas of citizenship through literary, historical, legal, and philosophical frameworks while building on the critical skills and disciplinary methods students learned in Odyssey’s first year course. In their second year, Odyssey students take two courses concurrently over the course of a semester. In one course they are focusing on the historical, legal, and literary constructions and critiques of citizenship specific to a U.S. context while in the second course they are focusing on the philosophical and political origins of the concept of the citizen and its contemporary manifestations.

For both courses, students began by reading Claudia Rankine’s Citizen: An American Lyric (2014). Rankine’s acclaimed collection of poetry and criticism challenges us as citizens to think about the embeddedness and ordinariness of racism as experienced by people of color who are too often rendered non-citizen subjects in our national imaginary. Rankine’s poetry is structured around third-person anecdotes that elaborate upon the intimacy of racism in the daily lives of people of color. In a time of national crisis over the very public killings of black men and women by publically funded government agencies, Citizen reminds us of the multiple ways black bodies have been and continue to be assaulted at an almost cellular level – in ways not seen by the public, but rather perpetuated by members of the same public that decry the most extreme form of racism, murder. Rankine is in no way minimizing the tragedies of Michael Brown, Eric Gardner, Rekia Boyd, Walter Scott and Freddie Gray through her focus on the intricacies of racism, but rather insists that no one, especially white, upper-middle class liberals, be allowed to deflect attention away from their own participation in the everydayness of racism even while they protest police brutality.

This week we read Walt Whitman’s “Song of Myself” (1855) in an attempt to put Whitman in conversation with Rankine’s Citizen, one an American epic and the other an American lyric and both chronicles of American national identity separated by 160 years. In thinking these two authors together, I was reminded of Whitman’s quote about what it means to be a poet, “the proof of a poet is that his country absorbs him as affectionately as he absorbed it”. While Whitman often set out to incorporate, both bodily and spiritually, the experiences of everyday Americans, Rankine reminds us of the burden other bodies carry within themselves, are forced to absorb in the face of a country that will never fully absorb them. For Rankine, the proof of a poet is recognizing that for so many citizens there is trauma and tragedy that gets absorbed into the body and that this trauma (not a feeling of national belonging, but the experience of national violence) is the very thing that constitutes citizenship for so many.

In celebration of the 50th Anniversary of the founding of the National Endowment for the Humanities, Chicago Humanities Festival, NEH, and Illinois Humanities are proud to host Claudia Rankine for a lecture and reading of her book Citizen: An American Lyric. The event is scheduled for Saturday, October 31st at 2:00 PM at Thorne Auditorium (375 E. Chicago Ave.). Later the same evening, Citizen will be performed at the Museum of Contemporary Art beginning at 7:30 PM. See the Chicago Humanities Festival website for information regarding tickets for these two events.