From the Southern Illinoisan
September 13, 2015

Read any of the widely available literature about military veterans returning to civilian life, and there’s always a common thread: A sense of being alone.

“Returning veterans can sometimes feel lonely and detached after coming from such a life of camaraderie,” wrote Tom Woolfe, veteran, career coach and author of “Out of Uniform: Your Guide to a Successful Military-Civilian Career Transition.”

Many veterans have found that camaraderie again at clubs such as Veterans of Foreign Wars or American Legion.

“Veterans need a place to go to be together with others who understand what it was and is like,” said Cheryl Barnett, a captain in the Army National Guard and veteran of combat in Afghanistan in 2008-09. 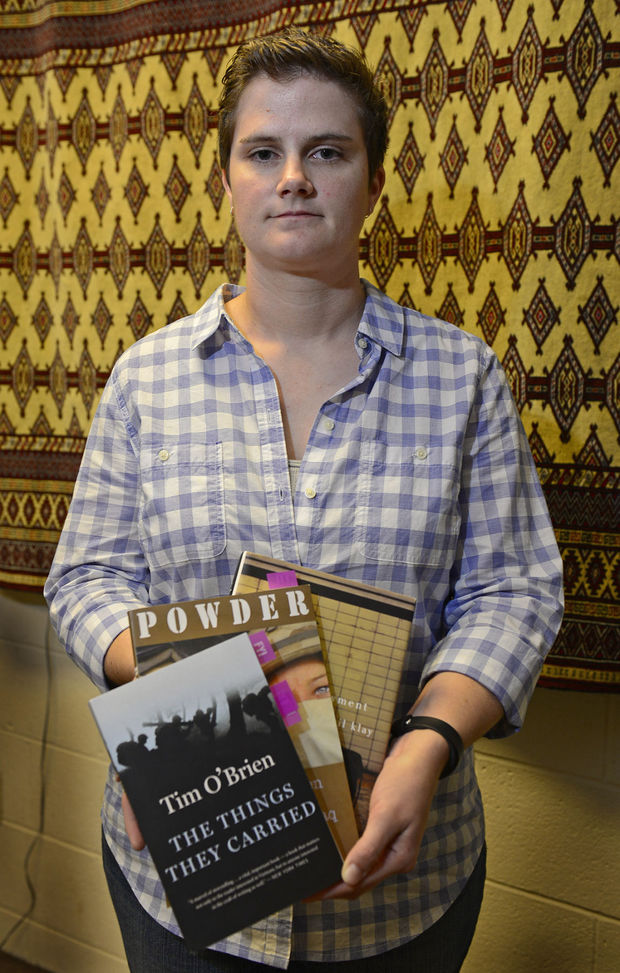 “This generation, my generation, doesn’t tend to go to places like the VFW of the American Legion,” she said. “It’s just not like it is for the fathers and grandfathers who gather together. I don’t really know why that is.”

It is one of the reasons Barnett is took up an invitation to coordinate and facilitate a new group for women veterans at SIU. “Standing Together: A Book Group for Women Veterans” began meeting a few weeks ago at Morris Library at Southern Illinois University, where Barnett is recruitment coordinator for the Center for International Education.

“Groups like this help us interact, to be with people who understand,” Barnett said. “One of the examples I use when trying to explain it to people is that if you want to tell a civilian something about your military service experience, you have to explain many, many details before you can even relate the story.”

“With other veterans, you don’t have to explain all that; they already know a lot of what you’ve experienced, because they’ve experienced the same things,” Barnett said.

Through discussions and selected readings, the hope is that women veterans will be encouraged to open up, to share their experiences and strengthen their sense of community and camaraderie again.

“The reading group is important because it creates a comfort zone, where women can openly discuss their experiences,” said Paul S. Copeland, in an SIU Media Services release. Copeland is SIU’s Veterans Services coordinator.

Barnett, who graduated with a degree in zoology from SIU, accepted her current position in 2011.

“It was hard to find a job when I came back; I had heard that there are a lot of places where veterans aren’t given a chance,” Barnett said. “But, SIU has been great for veterans.”

The Illinois Humanities Council sponsored similar programs for veterans at SIU, one in late 2014 and another in early 2015. Barnett said the council bought the books for this new group – mostly short stories, essays, “no long reading assignments,” Barnett said. The syllabus was already developed by the council, and Barnett took it from there.

“The reading material was chosen to bring certain topics into play,” Barnett said. “Not all of them are focused on combat issues for women only. Women experience the same thing as men in combat and in military service. It’s not just, ‘Gee, it hard to be a woman soldier, but, gee, it’s hard to be a soldier.’ But, sometimes, there are things that women want to share only with other women.”

“It is so valuable to be able to share our experiences,” Barnett said. “This group can potentially bring together soldiers and sailors from all areas of service and all ages.”

Barnett, who was expecting the first Vietnam veteran at Thursday night’s meeting, is eager to get the word out.

“This group is for all women from all branches of the service and of all generations,” she said. “I am hoping more of those women show up. I and others can learn from their experiences and see how it’s been for them, to learn from each other.”

The three books that will be the focus of the remaining meetings are “Be Safe, I Love You” by Cara Hoffman, selections from “Redeployment” by Phil Klay, and “POWDER: Writings by Women in the Ranks, from Vietnam to Iraq.”