WOOD RIVER — Shedding some entertaining light upon a lesser-known era in the history of North America, Lee Murdock will present a historical program of music and narrative. 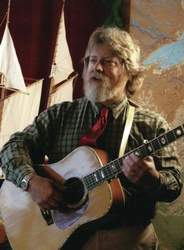 Murdock’s “Star Spangled Banner and the Struggle that Forged Two Nations” is set in the summer of 1812, when President James Madison declared war against Great Britain after the British navy had seized or impressed cargo and crews of the American merchant fleet on the high seas.

The War of 1812 contributed significantly toward defining the identities of the United States and Canada. The many songs composed during the war and its aftermath — including our own national anthem — express a broad range of Native American, white American, British and Canadian perspectives. They demonstrate that perceptions of war and its repercussions can vary widely, depending on one’s experiences of them.

A skilled guitarist and singer, Murdock performs several of these songs and provides commentary about them based on his extensive research. Noted as a fluent instrumentalist, Murdock’s musical influences span 15 generations, combining ragtime, Irish, blues and folk styles with his flair for storytelling in songs. Making folk music for the modern era, Murdock’s work is a documentary and also an anthem to the people who live, work, learn and play along the freshwater highways of North America.

Murdock, who is a member of the Illinois Humanities Council’s Road Scholars Speakers Bureau, has uncovered a boundless body of music and stories in the Great Lakes. There is an amazing timelessness in this music. Great Lakes songs are made of hard word, hard living, ships that go down and ships that come in, he has said.

The event is being produced in part by the Illinois Humanities Council’s Road Scholars Speakers Bureau, a program that provides organizations statewide with affordable, entertaining and thought-provoking humanities events for their communities. A roster of speakers, hailing from 16 different towns and cities across Illinois, present topics in history, culture, literature, music, politics, law, science and many more.

Wood River Public Library’s mission is to bring the people and the resources of the Library together in order to enhance the lives of individuals and the community as a whole.

The Illinois Humanities Council is an independent, nonprofit state affiliate of the National Endowment for the Humanities, dedicated to fostering a culture in which the humanities are a vital part of the lives of individuals and communities.

The IHC creates programs and funds organizations that promote greater understanding of, appreciation for, and involvement in the humanities by all Illinoisans, regardless of their economic resources, cultural background, or geographic location. The IHC is supported by state, federal, and private funds.

The Life Cycle of Clothing in the 19th Century