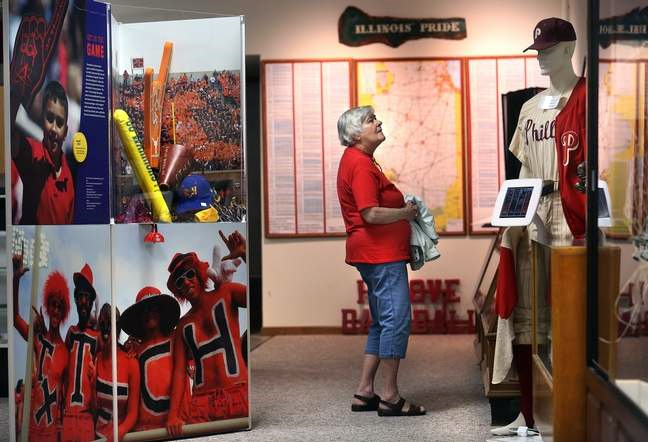 NOKOMIS — The Smithsonian’s traveling Hometown Teams exhibit that closes next weekend at the Bottomley-Ruffing-Schalk Baseball Museum highlights the importance of local support.

Museum staff felt that encouragement firsthand when a surge of volunteers joined the effort to host the national exhibit in the town of about 2,200.

Lisa Billingsley, vice president of the museum’s board of directors, said she was overwhelmed by the number of people interested in giving their time to the seven-week exhibit, which closes July 20. She had hoped for 30, but welcomed about 60 volunteers to the cause.

“We’ve gotten so many more people to volunteer and help out with this instead of just the same few people,” Billingsley said.

The touring exhibit is making about three dozen stops in communities in Illinois, Idaho, Nebraska, New Jersey, South Carolina and West Virginia. The BRS staff temporarily pushed its own content to the walls to make floor space for the Smithsonian’s panels. The local museum usually only pays tribute to baseball, but the touring display features a variety of sports including less traditional ones like skiing and surfing.

Jim Leefers, a museum volunteer from Coffeen, said the exhibit offers a unique chance to honor the important role these teams play in their communities and in a sports fan’s life.

“The effect the sports have on the smaller towns and the local teams, it breeds your interest in the larger sports and the professional sports,” Leefers said. “It’s always interesting to see how a town can get behind their team.”

But Billingsley and the BRS staff took that connection one step further. They gathered state championship trophies dating all the way back to 1914 from nearby towns such as Pana, Taylorville, Shelbyville, Raymond and Hillsboro, as well as Nokomis

Leefers said that while the Smithsonian exhibit seems to be bringing more people into the museum, it’s the local twist that really catches their attention.

“When you have a good team, the town gets behind you more,” Leefers said. “Our schedule became the team’s schedule. We’d follow them. I think it’s just neat the way that towns get behind their team.” Billingsley said the Smithsonian’s presence also has created a deeper sense of professionalism at the museum. Interest, too, has increased beyond even that first surge of volunteers. BRS has seen more foot traffic and donations since the exhibit arrived. Billingsley hopes that attitude continues even after the exhibit leaves. “I just hope people leave here knowing the history, a little bit about the game and the love of sports,” she said. “And that people realize how important your hometown team is to the community.”

Learn more about the exhibit and remaining display hours here.