This article originally appeared in the Pantagraph 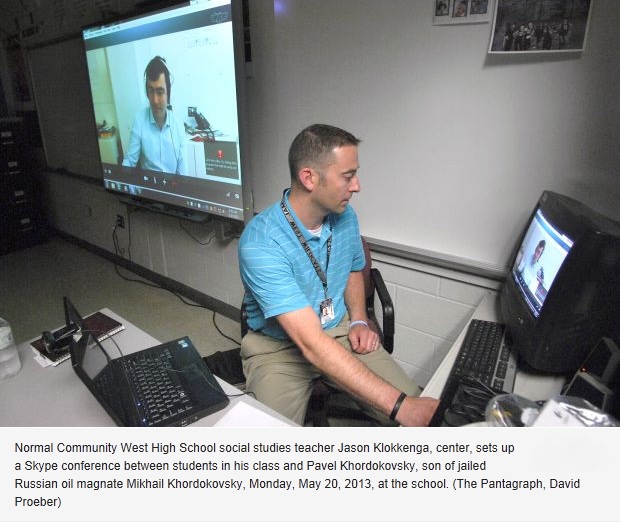 NORMAL — About 20 teenagers were so engaged in the story of a Russian political prisoner that they returned to Normal Community West High School at 9 a.m. Monday — after graduating on Saturday — to listen to his son.

They had learned in their Advanced Comparative Government class about Mikhail Khodorkovsky, a wealthy oil company owner reportedly imprisoned for speaking out against the Russian government.

“I followed this since it first broke,” said new graduate Tyler Ross.

He was among about 35 graduates and incoming seniors who interacted Monday with the businessman’s son, Pavel Khodorkovsky, via Skype from New York.

“A tiny article got this attention” from Pavel Khodorkovsky and led him to arrange to talk to the class live, Ross said, adding, “I’d be remiss if I missed this opportunity.”

The “tiny article” Khodorkovsky read in The Pantagraph was about the group of Normal West students who researched his father’s case and presented it in April at the Capitol Forum on America’s Future at Illinois State University. Their effort to create awareness about his father’s plight prompted Pavel Khordokovsky to connect with them.

“My students have become inspired by Mr. Khodorkovsky’s case and want to do something about this. This is truly a great example of students getting the most of their education,” said teacher Jason Klokkenga. Caitlin Slone, one of the students who made the presentation at ISU, said the opportunity to connect with Pavel Khordokovsky felt like a “reward” for the work they did.

Pavel Khodorkovsky, now 28, is a husband, father and businessman in New York. He told the students he was the same age as they are now when the story began to unfold in fall 2003 as he was preparing to start college in Massachusetts.

“I was naïve,” he said, saying he didn’t realize how serious the situation was. His father initially was sentenced to 13 years for tax evasion, and another seven years were added in 2007 in a second trial accusing him of stealing vast amounts of oil in train cars.

The students were told he is now the longest-serving “politically motivated” prisoner in modern Russia, and fast approaching the longest since the Stalinist era, the son said.

Public opinion has changed over the decade of the father’s imprisonment, he said, and polls now show about 65 percent of average Russians believe his father should be released unconditionally.

Pavel Khodorkovsky said he doesn’t believe replacing Russian President Vladimir Putin would solve the problems. There needs to be movement towards democracy and a fair judicial system, he said. His father should be released in October 2014, he told the students. “It’s still a long time away, but it’s a new set of hopes.”

Not Quite: Asian Americans and the "Other" in the era of the pandemic and the uprising