4/12/2013
This article originally appeared in the Pantagraph.
By Phyllis Coulter pcoulter@pantagraph.com 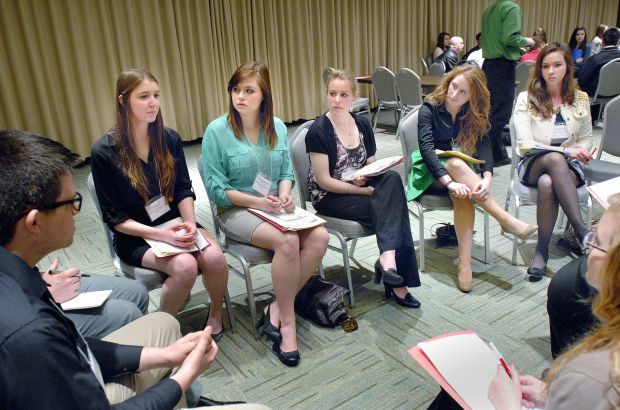 NORMAL — Hailee Verry of Eureka High School will be going to school in stocking feet to raise awareness about children who don’t have shoes to wear to school or can’t even go to school.

The high school senior was one of about 72 students from nine Illinois high schools participating Thursday in the Capitol Forum on America’s Future at Illinois State University’s Bone Student Center.

The program, run by the Illinois Humanities Council and sponsored by the McCormick Foundation, brings students together to talk about U.S. policies on a range of human rights issues, listen to experts and share information about their schools’ related outreach programs. Before coming to the forum, students read, analyze and talk about the issues in social studies classes.

Eureka High School students are looking at the right to education. To go along with that focus, students can pay $1 to attend school in their socks for a day, and the proceeds go to a Tom’s Shoe Co. effort to send shoes to children who need them.

In their research Eureka students learned there are many barriers such as gender and poverty that prevent children in some countries from attending school, said Eureka teacher Deborah Bertchi.

Normal Community West High School students focused their attention on Mikhail Khodorkovsky, a formerly wealthy Russian now in prison after speaking out against the government. He is featured in a new documentary called “Billionaire Behind Bars.”

Normal West students, including junior Madeline Herrman, were intrigued by Khodorkovsky’s story when their teacher, Jason Klokkenga, introduced them to issues of post-Soviet Russia. Khodorkovsky, whose prison sentence for “tax evasion” would end 2017, may be incarcerated longer if the government wants to prevent him from speaking against the current regime, Herrman said.

Her group hopes to get 1 million “likes” for the Russian’s Facebook page — currently there are 7,000 — but the ultimate goal would be to see him released.

“It’s about human rights and the right to speak,” she said.

Pontiac Township High School’s outreach project focuses on homeless students. Student Chloe Bodden said that last year about 21 of the 729 students in her school were homeless, including those “couch hopping” or living with different relatives.

Her school provides free breakfasts and lunches and backpacks to send food home over the weekend. Her group hopes to increase awareness of homelessness and make a difference.

The Capitol Forum was founded in 1999. Until last year the two-day event convened at the state Capitol in Springfield, including meetings on the House floor.

This is the second year the forum has been at ISU, and that gives college students training to be teachers a chance to work with the high school students. “They (high school students) are well-prepared,” said Jake Hirschman, an ISU senior from Streator, who was fascinated by some of the discussions.

Discussion topics led by a range of experts included: “Balancing Rights and Freedom of Expression; “Right to Health in Brazil”; “The Rights of Children”; “International Justice”; and “Military Intervention for Human Rights in Kosovo.”

“The topics are inherently controversial,” said Hirschman who will student-teach in the fall at Central Catholic High School in Bloomington. “It’s heated. We try to challenge them.”