This article originally appeared in the Mt. Vernon Register-News. 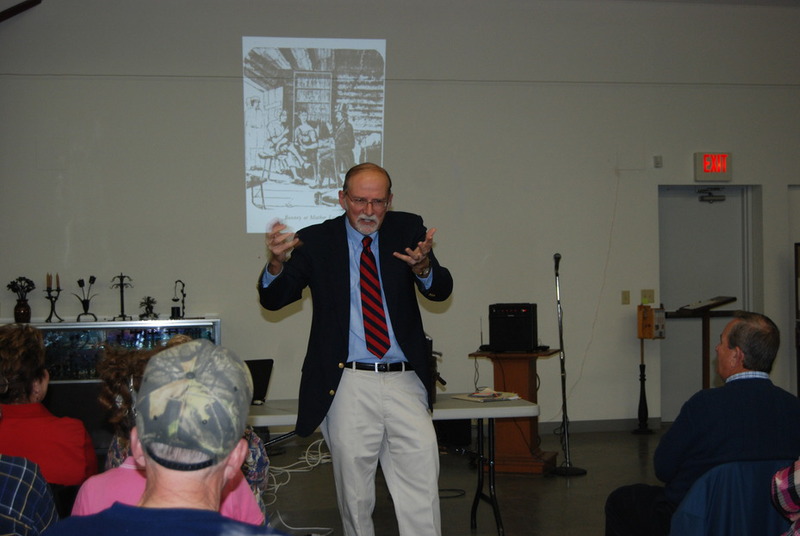 MT. VERNON — Outlaws in the 1800s were more likely to be convicted for stealing a horse than shooting someone, especially if they were unknown in the area, according to the featured speaker at an event Wednesday at the Jefferson County Historical Village.

“The chance of a conviction for a horse thief was greater, or for someone living outside the county because there was a shortage of men, only men served on juries, and many of those who were arrested for shootings claimed self-defense,” Hallwas said during his presentation.

Hallwas focused on the pre-and -post Civil War times, explaining counterfeiting was at its height and horses were very important to the era.

“Horses were very important at the time. They were used for racing, horse and buggies, and there were working horses on the tenant farms. In fact, nearly every county in that time era had a Horse Thief Detective Society,” Hallwas said.

“There were outlaws in Illinois before we became a state. Illinois for a long time was part of the West; it didn’t become a Midwest state until the 1890’s. And it was pretty simple to be an outlaw because it was fairly easy to get away unless us had a witness or you were stealing someone’s horse,” Hallwas said. “Outlawing ran rampant along the Mississippi River before it became a domain in the West.”

One of the first known outlaws from that time, Samuel Mason, was the “locust of the first outlaw gang in Southern Illinois,” hiding in caves in Cave-In-Rock, now a state park. In the early 1800’s there was a price on Mason’s head and he was eventually shot by his own gang, according to Hallwas.

The Harpe brothers — Wylie and Mikajah — were the first known psychotic killers in the state. “They enjoyed killing people,” Hallwas said, noting the brothers were part of the Mason gang for awhile. Wylie was hung in 1904; Mikajah’s head was cut off execution style.

Hallwas mentioned Ford’s Ferry Gang, established by James Ford, who operated a ferry across the Ohio River. He said that group was responsible for a lot of vigilante activity.

Edward Bonney, who wrote “The Banditti of the Prairies” in 1850, came to Illinois in the 1830’s. Bonney infiltrated the Long Brothers gang “working both sides of the line,” and was responsible for hunting down the men responsible for the murder of Col. George Davenport, for whom Davenport, Iowa, is named.

“The Civil War took so many men from their area. As a result, you didn’t have good law enforcement at home,” Hallwas said. “What happened, is outlaws flourished.”

Hallwas said jailbreaks were commonplace — many were made of wood — and law enforcement personnel were very inexperienced.

Brother sheriffs in separate towns — Charles and Milton Coleman — found out how inexperienced they were first hand when they met their untimely deaths by the guns of Ed and Lon Maxwell, two “crackshots,” according to Hallwas. Ed was brought back to Wisconsin from Nebraska by railroad and was hung in 1881; and his brother served time at Joliet — one of Illinois’ earliest prisons.

“We tend to make heroes out of our outlaws,” said Hallwas, noting Ed Maxwell got front page coverage in the New York Times for two days while news about Billy the Kid was relegated to an inside page following his death.