3/14/2013
This article originally appeared with a short video clip in The Chicago Tribune.
By Barbara Brotman 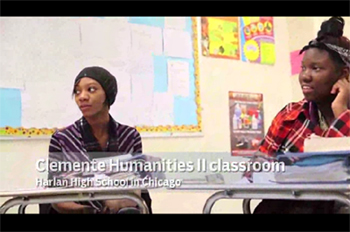 Plato’s “Euthyphro” can be tough going for anyone. Amy Thomas Elder struggled last year to make the case that the thorny philosophical text had anything to do with the lives of South Side high school freshmen. Finally, Thomas Elder asked her students how we know an act is righteous — the question at the heart of the dialogue. She had them make a list of specific good actions, put them in categories and describe them. The students conferred and triumphed. To Thomas Elder’s astonishment, the definitions they came up with — good actions have good outcomes, proceed from good reasons, show respect for others and reflect living out your beliefs — covered every philosophical possibility.
They had also illustrated the challenges and possibilities of an experiment now in its second year at Harlan Community Academy High School.
Under the Clemente Course in the Humanities, college instructors have been teaching the humanities, from “The Iliad” to John Locke to Ralph Ellison, to students at Harlan in hopes of changing their lives. The effort at Harlan is the first foray into a high school for the Clemente Course, which teaches the humanities to low-income adults nationwide. The format is as important as the content. Classes are Socratic seminars, with students sitting in a circle and discussing a text through a teacher’s questions.
“It’s not about teaching literature or history or whatever; it’s teaching them to think, to defend their point,” said Vivian Hapaniewski, the coordinator of the program at Harlan.
Harlan Principal Reginald Evans was initially uncertain whether his students could handle the readings. Only 11.2 percent of Harlan students met or exceeded state standards for reading in the Prairie State Achievement Examination last year.
But he decided they could and should, and he brought the course to the school and became a fervent backer.
“I think more than anything else, my feeling was, why not expose our kids to these types of works?” Evans said. “Instead of saying, ‘Well, they only read at this level, they’re not going to be able to do this’ … say instead, ‘Why don’t we push them and see and far how they can take it?” 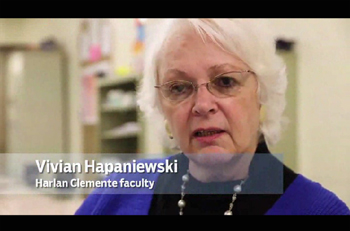 Harlan faces challenges endemic to CPS. It has students in gangs, and others who navigate carefully around them. Many Clemente Course students come from troubled family situations or have been touched by violence.
Those realities sometimes seep into the humanities classes. When students wrote Day of the Dead essays, Catherine Weidner, a senior lecturer in history at Lake Forest College and the course’s history teacher, was heartbroken at how many were about friends or family members who had been shot to death.
And Thomas Elder, who directs the Clemente Course in Illinois and taught philosophy at Harlan last year, was taken aback during a discussion about whether it was ethical to kill someone if you could get away with it. “The whole class said, ‘Yes, we would kill people we didn’t like if we knew we wouldn’t get caught,'” she said. She wasn’t sure they were serious. And some students did end up arguing the point and bringing up other reasons not to kill.
She concluded that there were parts of their lives she could not truly understand, and also that the program faced an uphill battle persuading students that they could succeed in life.
The Clemente Course has the same goal for its adult students. Earl Shorris, a University of Chicago-educated social critic and author who founded the course, saw it as a path out of poverty.
If poor people could get a rigorous, reflection-based education instead of merely being trained to perform poverty-level jobs, he wrote in his book “Riches for the Poor,” they would become full participants in public life, free to pursue opportunities they couldn’t have otherwise imagined.
Expanding the course to Harlan academy was his final project. Shorris, a New York resident, died in May at the age of 75. 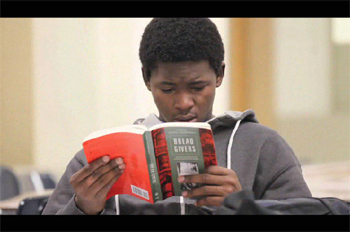 Evans believes the Clemente Course can help lift his students out of poverty by making them better readers and giving them more confidence. He also has more immediate hopes: That it will improve their test scores, help them get into college and provide an experience that will help them succeed when they get there. But those goals have sometimes taken a back seat to more prosaic matters.
The course got off to a rocky start during the last school year. Some students showed up late or not at all. In Thomas Elder’s philosophy class, one girl regularly put her head down on a desk and slept. A fistfight erupted among girls in Weidner’s class, prompting multiple suspensions.
Thomas Elder was so frustrated at having to attend to minor details like making sure everyone had pencils, and became so critical of her own performance as a teacher of high school kids, that she hired Darryl Heller, an adjunct history instructor at Harold Washington College and the University of Illinois at Chicago, to teach philosophy this year.
The students were also sometimes frustrated during their first year in the program.
“In philosophy, there were no right or wrong answers,” said sophomore Indonesha Lewis. “The teacher kept asking, ‘What do you think? What do you think?'”
“I didn’t understand it,” said Everett Brown.
In their second year, Brown and the other sophomores are more fully engaged in their Clemente Course classes, where the Socratic approach has drawn them in.
“All we do in other classes is listen to the teacher talk. In this class, the teachers listen to us,” Lewis said. “We ask each other questions. We teach each other.”
Especially about one of her favorite subjects, which she referred to as “that fight and stuff.” “The Trojan War,” her classmates shouted. 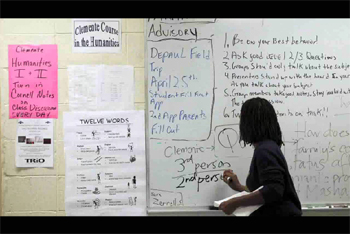 College no longer seems intimidating, several students said. The Clemente Course teachers “look at you as a college student,” said Deshaun Sargent. “They expect you to be ready.”
Evans is awaiting the results of standardized tests for sophomores scheduled for April to see if the humanities course made a difference.
But as the school year enters its final few months, there are encouraging signs. Attendance is up among the Clemente Course students, he said; misconduct is down; and classroom discussions are sophisticated and text-based.
“You’ll have a child that will say, ‘I think this (column) in Greek mythology represents this.’ You’ll have another student say, ‘Well, no, I disagree with you. I think it represent this, and here’s why.’
“It’s a respectful debate. The kids aren’t mad at one another when they disagree,” he said — an attitude that cannot help but spill over into the school’s culture.
Evans is so impressed with the Clemente Course classes that he has asked regular Harlan teachers to sit in on them.
And the student who slept through class last year, Thomas Elder said, has been practically jumping out of her chair to answer questions this year.
Clemente Course officials in Washington and Utah are thinking of starting high school programs, too.

“We’re all looking to Harlan to see what the outcome is and to see how it works,” said Lela Hilton, program director of the national organization and academic director of the Jefferson County Clemente Course in Washington state.

The course is not a “golden ticket” out of poverty, said Audrey Petty, director of the program at Harlan and an associate professor of English on leave from the University of Illinois at Urbana-Champaign.
But it “offers students a way into the humanities that can make them more awake to the world around them, and enlist them to engage and be citizens and thinkers,” she said.
The Clemente Course probably will raise students’ test scores, said Thomas Elder, but more important, it can change the way they look at the world.
“The humanities are about what makes life worth living,” she said. 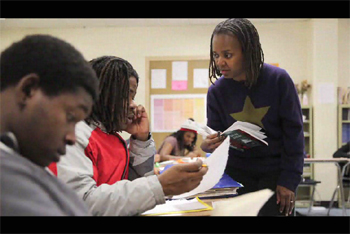 The costs at Harlan — $35,000 last year for one class of freshmen and $70,000 this year for a second-year class for sophomores and a new class of freshmen — have been divided equally between the national Clemente Course and Chicago Public Schools. The school and the program are trying to arrange funding to add another class of freshmen next year. The students already enrolled will have four years of Clemente Course classes.
Brown this year not only began understanding the material better, he found a way to enrich it with his own experience.
He suggested to Rebecca Zorach , who teaches the Clemente Course’s art history classes, that she listen to Kanye West and Jay-Z’s song “No Church in the Wild,” a hip-hop exploration of religion and history that includes references to philosophy like the line, “Socrates asked whose bias do y’all seek?” Delighted to encourage the connection between the classics and the students’ lives, Zorach made analyzing the lyrics and images in the video the subject of a recent art history class.
First, Zorach, a professor at the University of Chicago and a scholar of late medieval and Renaissance art and modern art and activism, spent 10 minutes getting the freshmen to write down their homework assignment. But once the discussion started, hands went up and ideas flew. A passage comparing levels of power among people, kings and gods was like “a chain reaction,” Maurice McMiller said. The video’s images of slavery that reversed the races, showing whites as victims, were intended “maybe to give blacks the perspective to see how it would look to them if they were the overseers,” suggested Lexus Greer.
The comments were still coming when the bell rang.
“They’re smart kids,” Zorach said.
Images from video clip that features students attending the Clemente Program in the Humanities at Harlan High School in Chicago on Feb. 20, 2013. The school is using the Socratic method to teach philosophy, literature and art history to CPS students. (Jose M. Osorio, Chicago Tribune)
Read a related article, “Course founder had deep Chicago roots: Shorris pushed to expand into high schools“, which appears in The Chicago Tribune as well.