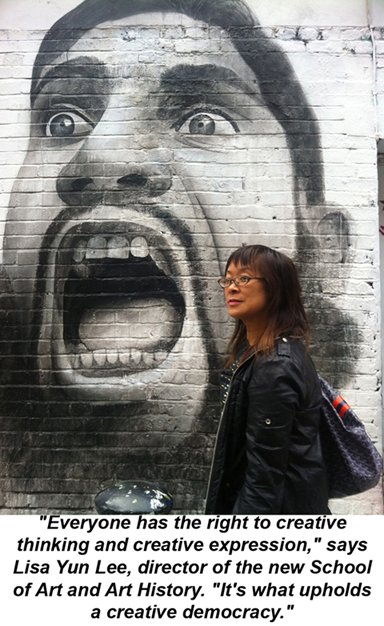 It follows, then, that she pretty much loves her new job as director of the School of Art and Art History, part of a reorganization of the College of Architecture and the Arts that becomes official this August.

Lee, previously director of the Jane Addams Hull-House Museum and an affiliated faculty member in art history, said she will focus on two major initiatives in her new post.

The first is “making sure art and the creative experience is accessible, available and open to as many publics as possible,” Lee said.

She quoted artist Joseph Beuys: “Everyone is an artist.” What he meant is that “everyone has the right to creative thinking and creative expression,” she said.

“It’s what upholds a creative democracy.”

Her second initiative is to promote women artists.

She cited art historian Linda Nochlin’s famous essay “Why Have There Been No Great Women Artists?”

“In the 21st century, one could ask the same question about artists of color and artists with disabilities,” Lee said. “When you go to museums, the art is overwhelmingly the work of white male artists.”

The new school will examine how to cultivate the next generation as to what is beautiful and what is valued, she said.

“Artists have always challenged that,” she said. “It goes back to when religious art, still lifes and landscapes [predominated].

“We want to be leaders in defining what art is and how art is understood in society.”

Lee is taken with a newly popular art genre that, instead of beautiful objects, focuses on creating experiences and opportunities for new relationships between people.

“For example, social practice artist Theaster Gates created the Dorchester Project, which [among other things] brings people together to have a soul food dinner as an art experience,” she said.

She’s working with the city to offer a free art school this summer, taking advantage of art studios and other spaces not in use for the season. A funding source is being sought.

Looking back at her seven years with the Hull-House Museum, where she continues as visiting curator, Lee believes she accomplished most of what she’d set out to do.

That includes “reinvigoration of a spacious site for debates, dissent and democratic dialog, giving a higher profile to Hull-House and making sure it was relevant to 21st century conversations,” she said.

A new, completely transformed core exhibition now sprawls over two floors. It explores the history not just of Addams but the “countless” reformers who worked with her and the thousands of residents who came through every week, she said.

“The museum became one of the nation’s most looked-to institutions for making history relevant,” Lee said.

Attendance increased appreciably and the museum won the National Preservation Award in 2012.

Lee secured funding from the National Endowment for the Humanities, the Institute of Museum and Library Services, Save America’s Treasures, the Terra Foundation for American Art, the International Sites of Conscience and other sources.

Born and raised in Poughkeepsie, N.Y., Lee is a first-generation Chinese-American whose parents are from Taiwan.

She earned a bachelor’s degree from Bryn Mawr College in Pennsylvania, majoring in religion and focusing on interpretation, literary theory and liberation theology.

Lee got a doctorate at Duke University, intending a career as a liberation theology pastor “but becoming a Marxist literary theorist instead.”

At Duke she knew Stanley Fish, and when he came to UIC as dean of the College of Liberal Arts and Sciences, he invited her to join him.

Lee helped found a nonprofit, Public Square, “that connected academics and universities with the greater public,” she said. “I thought there was a dearth of spaces for public conversations.”

Professors Barbara Ransby, Bill Ayers and David Perry were founding board members, and Lee was director. She held that post for 10 years before joining Hull-House Museum.

Divorced, she lives in River North with her son, Henry, 14, and daughter, Josie, 11.

“I love hip-hop and spoken word,” Lee said. She serves on the board of the International Contemporary Ensemble, a new music group in Chicago and New York.

Lee has given a lot of thought to the role of the new School of Art and Art History.

“On this campus and in this city, who is going to provide the tools of thinking creatively?” she asks.