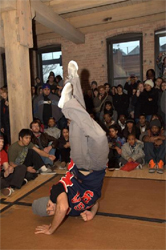 For the best mix of hip hop and the arts, you won’t want to miss WBEZ’s annual Winter Block Party for Chicago’s Hip Hop Arts. Now in its fourth year, this free, all-ages event, the ultimate showcase of the city’s hip-hop arts scene, features visual and performance art, poetry, dance, film and music.

Among the events this year is the street art and graffiti gallery exhibition, curated by Believe Inn and Kevin Coval, which features over 20 artists including Anthony Lewellen, Krista Franklin and Jourdon Gullett.

Other events include the Public Square-produced “Word: Across Generations,” a poetry performance and forum discussion on the power of words, featuring poet Roger Bonair-Agard, along with Chicago artists Chance and Fatima Warner; and a screening of Howard Zinn’s The People Speak, an artistic documentary about social change; the popular “All City 3-on-3,” with some of Chicago’s best breakdancing crews competing in a dance battle; and the Emcee Olympics, an all-skills hip hop emcee competition.

Capping off the evening at 8pm is the event’s highlight, “Legends of the BodyRock: An All-City 3-on-3,” a retrospective on Chicago’s breakdancing history featuring live guests, interviews and the semi-final and final rounds of a live head-to-head “3 on 3” dance battle hosted by Legendary Brickheadz. This is the only ticketed event ($10-$15); for ages 18 and up.

The Winter Block Party for Chicago’s Hip Hop Arts will be held Saturday, Jan. 21 at Metro, 3730 N. Clark St., from 12pm-11pm. For a full schedule and additional information, click here.