This article originally appeared in The Carmi Times 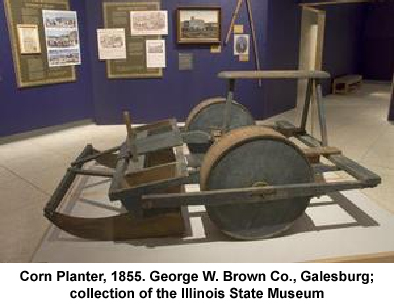 Whittington/Rend Lake – To commemorate the bicentennial of Abraham Lincoln’s birth, the Illinois State Museum at Rend Lake presents Part II of an original exhibition, From Humble Beginnings: Lincoln’s Illinois 1830 – 1861, exploring aspects of the state that Lincoln called home between 1830 and 1861.

The exhibition at the Illinois State Museum Southern Illinois Art and Artisans Center is on display in the museum gallery through May 13, 2012.

In 1830, like thousands of southerners before him, Abraham Lincoln drove his team of oxen with his family to frontier Illinois in search of a better life. Thirty years later, a train carrying the sixteenth President of the United States – Abraham Lincoln – steamed out of an Illinois Station.

When the Lincolns first arrived, Illinoisans depended on waterways for efficient travel and to transport products to Southern markets. By 1861, railroads tied the state to the industrial Northeast, sparking a general expansion of industry and agriculture in Illinois. With improved transportation, Northeasterners and Europeans flooded the state, creating an intensely dynamic population – a microcosm of America, which Lincoln determined to represent.

Featured in Part II of the exhibition are stories and objects related to The Underground Railroad, The Alton Riots, Temperance, Native American Removal, Utopia at Nauvoo, The Rise of Chicago, Agricultural Innovation, and the Illinois and Michigan Canal history. Together, these demonstrate the dynamic changes that helped transform Illinois from a region to a powerful state. When the Lincolns first arrived, Illinois was a frontier state with a population of just 157,445, and by 1861 when he left the state, the population had grown to over 1.7 million.

This exhibition provides a peek into the Illinois into which Abraham Lincoln arrived. It gives us an opportunity to understand the changes in the cultural development of the state and in the lives of Illinois citizens during Lincoln’s time in Illinois,” said Angela Goebel-Bain, Illinois State Museum Curator of Decorative Arts and co-curator of the exhibition.

The exhibition was developed by the Illinois State Museum, drawing on unique objects in the Museum’s collections, such as an 1855 Corn Planter (the first commercially successful horse-drawn corn planter) and an 1840 Star of Bethlehem quilt.

From Humble Beginnings: Lincoln’s Illinois 1830 – 1861 is made possible in part by a grant from the Illinois Humanities Council, the National Endowment for the Humanities, and the Illinois General Assembly. The Illinois State Museum Society’s 1877 Fund has also provided support for this exhibition.