“How many people in here voted in the last election?” former Freedom Rider Thomas Armstrong III recently asked a group of about 35 at Ron’s Barber Shop.

When about 20 of the attendees raised their hands, Armstrong responded, “Did you know that in Mississippi [in the 1960s] you would get killed for that?”

Armstrong addressed the crowd [on] Sept. 9 as part of a forum hosted by the community group, Café Society, a program of the Illinois Humanities Council, at the barber shop, 6058 W. North Ave. It was because of efforts by Armstrong and his compatriots that the black people in the audience who raised their hands were able to participate in the last election.

His courage and influence were not lost with those who packed into Ron’s Barber Shop.

“We have had a lot of great discussions here, but I think this was one of the best,” shop owner Ron Gibson said. “I’ve been looking forward to this all week.”

When Armstrong began his talk, the crowd was about 20 people thick. But as he spoke, visitors continued to arrive, and few of the barber shop patrons found their way to the door.

Jay Jackson, an Austin resident who lives “just around the corner,” said he went to Ron’s at about 5 p.m. for a haircut, unaware of the event. He stayed long after his trim to listen to Armstrong.

“Its moving in so many ways,” Jackson, 37, said of Armstrong’s talk and his experiences. “That was during the time my father and my father’s father struggled for equality. And I want to know more about what it took to [achieve that].”

Jackson left the shop with a free copy of Armstrong’s new book, which he planned to share with his three young children. 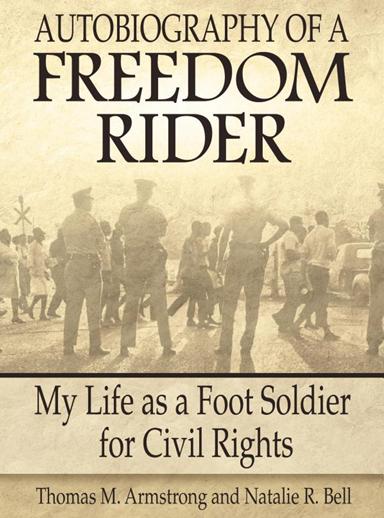 The book, Autobiography of a Freedom Rider: My Life as a Foot Soldier for Civil Rights, co-written by Natalie R. Bell, was published on May 26, 2011, the date of the 50th reunion of the Freedom Riders in Jackson, Miss. Armstrong’s book tells about his experiences with segregation and inequality, and his drive to eradicate it.

His first encounter with segregation was at the Dairy King, when he was barred from ordering an ice cream cone from the “white’s only” window.

“That made me understand as a young boy, 13 years of age, that something was not right in our community,” Armstrong said.

That awareness led Armstrong to sign up with civil rights activist Medgar Evers and the NAACP to travel throughout Mississippi to register black voters.

In 1961, Armstrong was arrested at the Trailways bus station in Jackson, Miss., while attempting to challenge  segregation on interstate buses and protect Freedom Riders, who had just been attacked at their first two stops in Alabama.

“We were watching with concern because their next stop was Jackson, Miss.,” said Armstrong, who attended Tougaloo College, 10 miles north of Jackson. “We were concerned because we thought that if they [Freedom Riders] got into the jails in Mississippi, they probably weren’t going to get out.”

“So some students at Tougaloo thought ‘what can we do to help them?’ because once they get into jails in Mississippi there is no telling what would happen to them. Our jails in Mississippi had a history … So we decided that the best thing for us to do was to get into that jail with them.”

Armstrong and three other Tougaloo students purchased tickets to New Orleans and went to the station to try to get on the bus.

While the four waited, the chief of police approached them and said they were “disturbing the peace” and had to leave. When they refused, they were arrested and interrogated for two days at the Jackson City Jail before joining the Freedom Riders in the Parchment State Penitentiary.

Fortunately for Armstrong, the president of Tougaloo College came and bailed him out after four days.His arrest was eventually used as part of a federal case brought by the NAACP.

Sharon Jaddua, an Austin resident who recited two Paul Lawrence Dunbarpoems at the event, said she thought Armstrong’s talk was wonderful – and important for people to hear.

Today, along with his book, Armstrong does speaking engagements at area schools and still goes south every year for a reunion with fellow Freedom Riders. He said his work is important because the history is being lost, and “we have a lot to do.”

Armstrong described going to one mostly black high school where the students had never even heard of the Freedom Riders, a fact confirmed by their teachers who said they are “teaching for the test” and are forced to skip many crucial periods of history.

Many of the attendees at Armstrong’s talk decried the loss of knowledge about the civil rights movement.

James Garner, a barber at Ron’s, said he had never met anyone who had been involved in the struggle for the rights and equality he enjoys today.

Garner asked Armstrong, “As a young man, only 18 years old, where did you find the courage to do that?”

Armstrong said it simply had to be done.