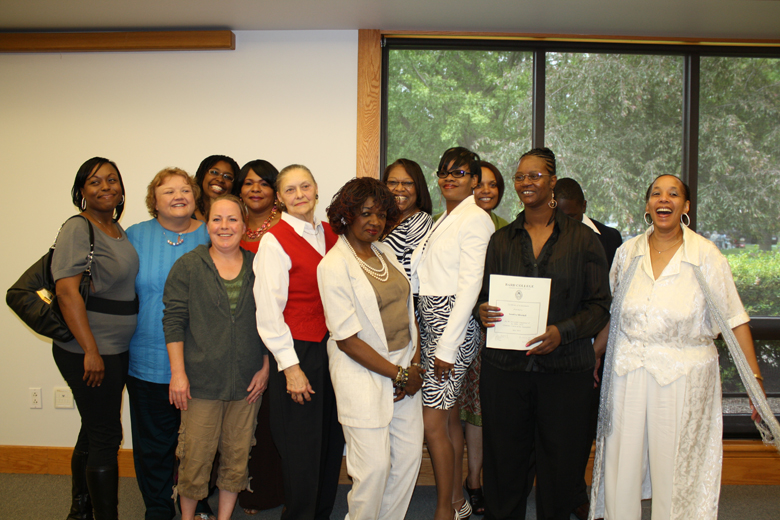 As you may have heard, the economy’s still struggling. That’s not good news for anyone (except maybe short-sellers?), but for those without post-secondary education and already struggling to make ends meet, it can be crippling. As Michael Burns, co-assistant director of the Odyssey Project, says, “ With only a high school education, it makes it difficult for a person to earn a livable wage. And more and more, the people who get access to post-secondary education do not come from lower and lower-middle-class economic backgrounds.“

That’s where the Odyssey Project (check out their wiki here) comes in. Burns explained, “The Odyssey Project is a program, partially funded by the Illinois Humanities Council and the University [of Illinois], to offer college credits in the Humanities to people at or slightly above the poverty level. Hopefully to expose them to the humanities and give them a chance to go back and take college classes in the hope that they will go back and continue their undergraduate education.“

They’re currently accepting applications (download the pdf here) for the 2010-11 academic year. Last year, the third for the program, there were around 90 applications for 30-35 slots, according to Burns. Classes meet two evenings per week at the Douglass Branch Library, and the course material ranges from Art History and Literature in the fall to U.S. History and Western Philosophy in the spring.

The program is offered at no cost to students, which includes free books and childcare as well as transportation assistance. Shamika Goddard is a Texas native who spent three years at Stanford University before financial difficulties forced her to withdraw. She currently works at Cracker Barrel in Urbana and is a 2010 graduate of the Odyssey Project.

“I spent a lot of time at the Douglass Branch Library the summer before the program started and I got to know the librarians there,“ Goddard related. “One day, I was checking out and I noticed the pamphlet about the program, and as I was flipping through, I saw the word “Free,“ which is one of my favorite words, especially when it comes to educational programs. So, I took the pamphlet with me and read through it, and it sounded like something I could benefit from as a student that’s in between my degree. It sounded like I could not only get the six college credits, but I could also get into a structured academic framework, since I’ve been out of school for so long.“

Goddard was surprised by how much she enjoyed the Art History course. “ It was great to get a foundation for art,“ she said. “We talked about the canon and the basics for art. Being able to look at the world with an artistic eye. I really enjoyed being able to do that, and be able to throw out words like ‘the canon’ and composition.‘“

CHALLENGES COME WITH THE TERRITORY

Since students in the program come from diverse educational and socioeconomic situations, one of the challenges for the instructors is to make sure they’re not making assumptions about what the students know or don’t know. “Some people are very familiar with they’re expected to do,“ Burns noted, “and can immediately pick up on the instructor’s delivery and organization and understand how they’re supposed to respond to that as a student.

“Others, I think, are more ambivalent, not as clear about what it means to be a student returning to an educational context and how they can step outside who they are and look at what should be going on. I think part of that falls on me and I assume that responsibility, especially with the critical thinking [course that I teach].“

There’s also a wide gap between the students when it comes to comfort with technology. “Some students don’t have internet or personal computers at home,“ Burns said. “Some people even submitted hand-written drafts just because they were unfamiliar. Some people used typewriters to type their papers.“ Compared to the Rhetoric classes that Burns teaches as a U of I doctoral student, he found it more difficult to engage the Odyssey students outside of class time because of these limitations.

On the other hand, drawing from a wider range of age and experience has benefits, as well. “When we were in history class talking about the black people moving from the South to the North, there were people whose families did that, and we got to hear that,“ Goddard said. “To be able to sit in a room with people and hear their stories, that was amazing to me.“

Burns also enjoyed that discussion. He said, “Some people actually brought in family artifacts to speak to the Great Migration. They had pictures of their moms and dads, and aunts and uncles who actually did that. I think personal experience connecting to the broader ideas of U.S. History or any other subject that we dealt with was very cool. Folks started to recognize the ways in which they’re already thinking and already doing things. It was just a matter of connecting the personal to an intellectual project.“

Goddard summed up her experience like this: “I would just like to say as a participant in this program that there were all kinds of people in this class. Wherever you may be, and if this program sounds awesome to you or perfect for someone in your life, I would say apply and go for it, because at the end of the program — I went in with one goal, wanting to have the six credits — but I got so much more out of it, and I can now pass my experience on to other people in the community and to other people that can benefit from it.“

Burns hopes that the Odyssey Project is a permanent program, but knows that’s not up to him. “We want it to go on forever. Whether the Provost’s office agrees to continue our funding is another issue,“ he said. Goddard and Burns also agreed that more diverse course offerings — perhaps in such fields as math and science, women’s and gender studies, etc. — would be a benefit.

They’re also committed to find ways to reduce the attrition rate of the program, which hovers around 50 percent. Burns stressed, “Although we feel that we’ve had a moderately successful year, ideally we want the 30 that start to graduate. That’s what we want, and that hasn’t happened yet. People are adults, they have children, and things are going to come up. Given the choice of dealing with real life or sitting around and talking about this esoteric stuff in the humanities, the choice is obvious.“ But by involving program alumni as part of a support system, among other adjustments, they hope to reduce the number of students who leave because of frustration.