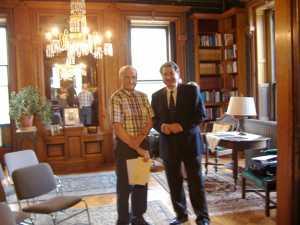 This article originally appeared in the Ottawa Times.

Hegeler Carus Mansion’s Second Sundays Lecture series recently brought the story of Albert Einstein to a full hall of about 40 people to listen and learn about the physics genius and the little known “other sides” of his personality.

Presenting “Einstein: His Science, Philosophy and Humanity” was Pangratios “Pan” Papacosta of the School of Liberal Arts and Sciences, Science and Mathematics at Columbia College Chicago. Papacosta holds a doctorate in physics from the University of London and now teaches science and math at Columbia.

Originally from the Republic of Cyprus, Pangratios said he became fascinated with Einstein about 20 years ago and has spent years since researching and teaching about the legendary scientist. He enjoys bringing a better understanding of the “Father of the Atomic Age” through lectures like the one presented in La Salle.

“Most people know little of Einstein’s views on God and religion or his disdain of materialism, racism, militarism and nationalism,” said Papacosta.

“We know him as the maker of the atomic bomb, the physics genius. His brain is in slices in some part of the world, but people know little of his views or his ‘dark side,’ too.”

Papacosta told the audience Einstein was not a great father or husband. He was not a good student and he had a child out of wedlock and did not know what happened to her after she was given up for adoption by the mother who eventually became his first wife, Mileva MariÄ‡, and whom he later divorced to marry his first cousin, Elsa ¨LlÅ‘wenthal.

“We are all beneficiaries of Einstein’s work,” Papacosta went on to explain.

From his theories came nuclear power plants, solar cells, lasers used in CD and DVD players, GPS satellites and nuclear medicine, but it was the use of the atomic bombs to end World War II that troubled Einstein greatly.

The softer side of Einstein revered solitude said Papacosta, and “Peace, a balance and harmony in nature. He was a devoted pacifist. He loved humanity but wanted to be detached from it. When he was asked what would be his favorite job, Einstein replied ‘a lighthouse keeper’ so he would be by himself,” said Papacosta.

The audience learned Einstein also was a philosopher, and Papacosta scattered many of his quotes among the lecture, such as “imagination is more important than education’ and “God does not play dice with the universe.” Einstein was subtle but not malicious, and said, “Science without religion is lame, and religion without science is blind.”

“Einstein died in a hospital in 1955 and his last words were in German, but the nurse did not understand them,” told Papacosta. “What a shame, I would love to have known what he said.”

Ken Ficek and Linda Hiltabrand attended the lecture. Both are chartered docents of the Hegeler Carus Mansion.

“You think of Einstein as a great scientist but not a philosopher. I’ve learned a lot I didn’t know about him. I think this was a great talk,” said Hiltabrand.

‘Yes, this was a very interesting lecture,” added Ficek.

At the conclusion of the lecture, Papacosta spoke to people individually and answered questions about his own work as well as Einstein’s life.

Blouke Carus, a third-generation Carus, thanked Papacosta and invited him to return for more lectures in the future.

The lecture was one of many presentations by the Hegeler Carus Foundation, made possible in part by an award from the Illinois Humanities Council, the National Endowment for the Humanities and the Illinois General Assembly