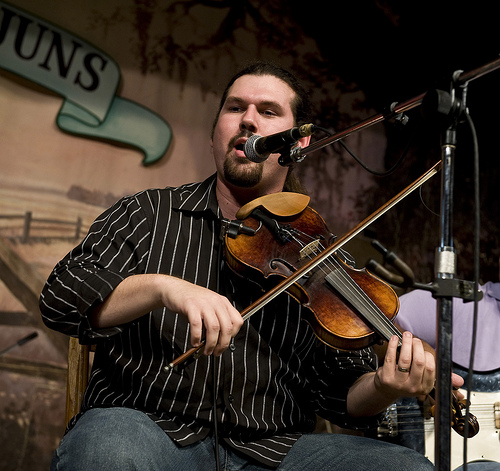 CHICAGO – The Illinois Humanities Council is pleased to announce its third IHC Road Scholars Speakers Bureau whistle-stop tour of southwestern Illinois from June 7 to June 8, 2010. Acclaimed musician and historian Dennis Stroughmatt will be performing “In Fiddle Music and Tall Tales: French Creole Culture in the Illinois Country of Upper Louisiana,” his acclaimed musical history of Illinois’ Creoles, at four sites across southern Illinois, from Norris City to Chester.

All events are free and open to the public. For more information about any of these events, please call the Illinois Humanities Council at 312.422.5580 or visit www.prairie.org/RoadScholars. The complete schedule of performances is:

Born and raised in southeastern Illinois, Dennis Stroughmatt is an authority on French Creole music and the culture of “Upper Louisiana,” a.k.a Illinois and Missouri. First introduced to local French history as a teenager in Indiana, Dennis later moved to southeast Missouri and spent over three years studying and learning to speak Illinois French Creole, to play the fiddle, and to sing many of the traditional songs that have permeated the region for over three hundred years. He would also go on to live, work, and play music in the “Cajun country” of Louisiana and study in Quebec, thus completing the circle of French culture in North America.

ABOUT “IN FIDDLE MUSIC AND TALL TALES”

The first European culture to establish roots in Illinois, French Creoles along the Illinois, Wabash, and Mississippi Rivers would in many places be supplanted by later Anglo and German American settlers. Instrumental in winning Illinois for the United States during the American Revolution and important to the success of the Lewis and Clark expedition, Illinois Creoles have a strong cultural history that opens a door to their effect in the Midwest. This presentation will explore what brought the French here, their fiddle music, a few of their exploits, and their lasting influence on the Illinois Country.

The Illinois Humanities Council’s Road Scholars Speakers Bureau program encourages Illinoisans to reflect upon the human condition from a range of perspectives, providing a distinctive forum for discussion and dialogue. It places humanities scholars in diverse communities throughout the state where they give presentations on a variety of topics that include history, culture, literature, music, politics, ethnicity, science, and religion.

The Illinois Humanities Council is a nonprofit educational organization [501 (c) 3] dedicated to fostering a culture in which the humanities are a vital part of the lives of individuals and communities.  Organized in 1973 as the state affiliate of the National Endowment for the Humanities, the IHC creates programs and funds organizations that promote greater understanding of, appreciation for, and involvement in the humanities by all Illinoisans, regardless of their economic resources, cultural background, or geographic location. The IHC is supported by state, federal, and private funds.

“Kaskaskia and the Pursuit of a More Perfect Union, Part 1” Online Premiere

Public Programs, The Country and the City