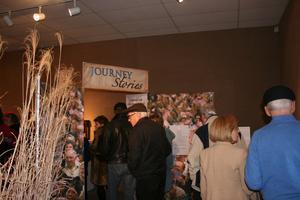 This article originally appeared in the Monmouth Daily Review Atlas.

MONMOUTH — The culmination of the long hours and hard work those involved in bringing the Museum on Main Street exhibit “Journey Stories” from the Smithsonian to Monmouth came Saturday — and it opened to rave reviews.

Along with numerous community members, two people intimately involved in the creation of journey stories attended the celebration Saturday. William Withuhn, curator from the History of Technology Department at the Smithsonian Institution’s National Museum of American History and curator of Journey Stories, and Dennis Cremin, one of the State Scholars for this Museum on Main Street project and an Assistant Professor and Director of the History Center at Lewis University, were both in Monmouth for the premier.

“This is one of the best installations of Journey Stories I have seen or heard about,” Withuhn said. “It sets a new standard.”

He credited Buchanan Center for the Arts Director Susan Twomey and her team, including her partner Warren County Library Director Larisa Good, with finding and displaying the “organic experiences of local” people. He said gathering the history of the area will “leave a permanent effect in the community.”

The exhibit, which debuted this year and will be on display through 2014, will visit 110 different towns of less than 30,000 people throughout the country, Cremin said. Typically, the traveling Smithsonian exhibits go to larger communities such as Chicago, Washington and New York. The idea with Journey Stories was to make the experience accessible to people who would not normally see such an exhibit.

The Smithsonian has created five versions of the exhibit, and Illinois was one of five states to get the display in its inaugural year. After traveling across the state for more than 1,000 miles through five other stops, its final Illinois destination will be a six-week stay in Monmouth, running through March 12.

Twomey said she was “relieved but sad” now that the work was over. She compared Saturday to a wedding, because in the weeks leading up to the opening, Twomey was working 20 hour days — one day last week she simply laid down on the floor for an hour-long nap and got right back to work.

“I am proud of the community and the regions outside our community that have contributed to this event,” she said.

Good said by learning all the area’s history, she developed a deep pride in Warren County, even though she is not originally from the area.

“It’s hard to pick a favorite … (but) I really feel the local component is the most special part of the exhibit,” she said.

On top of everything, Twomey and Good said they were also grateful for the lifelong friendships they made with Withuhn and Cremin.

“I feel a little sad, like Dorothy leaving the Tin Man and Scarecrow,” Twomey said, later adding, “I was trying not to cry. It’s an honor for them to say we met their expectations and had gone above them.”

The exhibit was also well received by the local community. The library was packed with a standing room only crowd for the kickoff presentation, and most people made their way over to check out the exhibit at the BCA.

Monmouth College history professor Simon Cordery said it was a “remarkable exhibition.” He especially appreciated seeing pictures from local historian and colleague Jeff Rankin. He said Rankin had shown Cordery and others the pictures before, but seeing them enlarged and on display as part of Journey Stories was amazing.

Nichols said the local portion of the exhibit that spoke the most to her was the information on the covered bridge.

“I played on that as a child. It was an eighth of a mile from my house. It’s gone now, mined
away by Monmouth Stoneware,” she said.

Cordery, who is involved in Monmouth College’s Midwest Studies Initiative, said that while the format is obvious quite different, Journey Stories touches on many of the same ideas and information the new college program plans to cover.

“The connection between the world and our local region is important and (understanding) it really enriches our life,” he said.

Twomey and Good both echoed that sentiment.

“I hope people walk away with a sense of pride for this community,” Good said. “I think, in a way, highlighting (the history) is taking pride in where we live.”