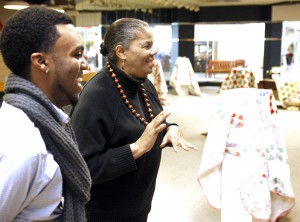 This article originally appeared in the Southern Illinoisan.

CARBONDALE – When she was announced as a recipient for the 2009 Studs Terkel Humanities Service Award at a city council meeting last month, Corene McDaniel’s mouth dropped.

“I thought to myself, ‘Who is getting the award?'” the councilwoman said Monday. “When (City Clerk Janet Vaught) called my name I almost fell out of my chair.”

The knowledge she’s won the award might have sunk in, but McDaniel said she’s still surprised.

“I am quite, quite honored,” she said.

The award is bestowed by the Illinois Humanities Council in honor of the late author, historian, commentator and broadcaster.

While she is involved with a number of community and civic groups, McDaniel is being acknowledged for her work with the African American Museum of Southern Illinois. She is one of 40 people in the state to receive the award this year.

Along with her husband, Milton, McDaniel helped co-found the museum in the late 1990s. The operation began as a modest one, she said.

“When it started out, we recognized the need to make the community and area aware of the accomplishments of African-American citizens,” she said. “That’s how it started, just making people aware. Then we started to acquire other items, but we didn’t have anywhere to put them. We kept them in our house under a bed for several years.”

By 2005, the museum had found its home inside University Mall in Carbondale. Since then, the museum has been home to numerous traveling exhibits and houses thousands of artifacts, many of them donated by local residents.

“It was nice to take that stuff from under the bed,” McDaniel said, before noting the collection continues to grow. “I am not sure how many pieces, but we have about 12 permanent exhibits and a lot of exhibits on loan to us.”

McDaniel’s award comes in the midst of a fundraising effort by the museum as they seek to renovate their future home, the old Attucks High School on East Jackson Street. Museum officials are hoping to raise about $112,000 for the first phase of the project and have so far raised about $25,000.

McDaniel will be acknowledged at tonight’s city council meeting.