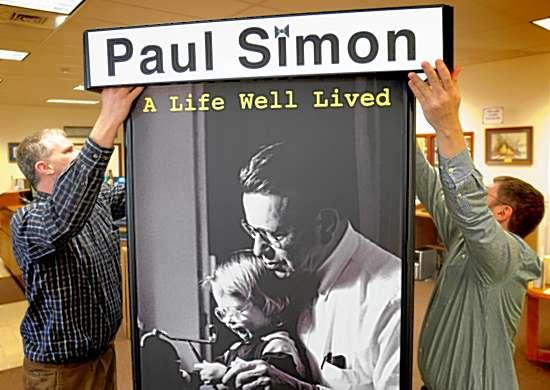 This article originally appeared in the St. Louis Suburban Journals.

For Troy, it’s another homecoming of a favorite son, the late U.S. Sen. Paul Simon.

This is second of three destinations for the exhibit, funded through the Illinois Humanities Council. The display, in place through Jan. 21, calls attention to the permanent collection of Simon’s papers and memorabilia that opened to the public in October at the Morris Library of Southern Illinois University Carbondale, where he taught and directed the Public Policy Institute.

“The exhibit has two freestanding models with photos and other things that refer to the collection,” said Jeanne Sagovac, exhibits director at the library in Troy.

She gathered books written by Simon to display and make available easily to the public. Simon lived in Troy almost 25 years. He died in December 2003.

Walter Ray, research archivist for Morris Library, said he worked on the Simon papers three years to prepare them for public use. After he left the U.S. Senate, Simon donated them to the library in 1998.

“My goal with the exhibition,” he said, “was not to show only what he accomplished, but who he was as a person, what formed him and made him the person and public servant that he was.”

“It is a sizable collection,” Ray said. “It includes some personal papers to his parents, as well as scrapbooks that covered his whole life. His mother started them, then staff people kept them up.”

Sagovac said the local library feels a kinship to Simon, because his wife, Jeanne, belonged to the Troy Women’s Club, a group instrumental in establishing a community library. Also a state legislator, lawyer and author, she later became chairwoman of National Commission on Libraries and Information Science.

Regina Hendrickson, director of the U.S. Senator Paul Simon Museum in Troy, said, “It’s an honor to have the exhibit find its way to Troy to honor Sen. Simon. We can probably say he started his political career here and it was just the beginning of a great political career.”

Simon inspired Hendrickson. Although a relative newcomer to Troy after living in southern Illinois, other states and abroad, she actively supported him, beginning when she was an intern at age 18, throughout his political life.

“The senator always encouraged young people to step forward and let their voices be heard,” she said. “He always said you need to draw them in when they are young to inspire them through life.”

Interest in Simon and his principles continues, Hendrickson noted. The local museum’s program grew from 50 to 300 in three summers. This year’s program, expected to be held at Glen Carbon Centennial Library and Troy’s Tri-Township Library, will explore a different language, including signing, each of six weeks. It is an extension of Simon’s book, “The Tongue-Tied American.”

“In this book,” Hendrickson said, “he encourages people to take up foreign language as a tool of extending democracy around the world. They should be diverse, open and educated in understanding other cultures.”

Canceled: The Life Cycle of Clothing in the 19th Century