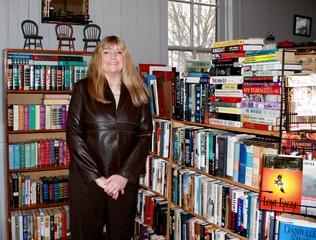 This article originally appeared in the Lincoln Courier.

Emden, Ill. – LaDonna Gass of Emden has been named one of 44 recipients of the 2009 Studs Terkel Humanities Service Award.

She will be honored during a 4 p.m. ceremony Thursday at the Whistle Stop Library in Emden.
Village President Ivan Rademaker nominated Gass for creating a community library in the town’s former railroad depot.

The Illinois Humanities Council, in conjunction with Illinois mayors, presents the awards to individuals who have made a lasting contribution to the cultural life of their communities.

Many of these recipients were involved in creating awareness about local or regional history in their communities through the establishment of historical societies or museums. Others were noted for their outstanding dedication to education, formal and informal; to literacy and library programs; and to creating awareness for cultural heritage, music, literature, and the arts.

“I said a long time ago the depot would make a good little library if we got a volunteer to do it,” Rademaker said.

And in 2007, Gass volunteered. She and her sister-in-law, Laretta Renken, and husband, Earl Gass, moved the town’s Christmas decorations from the building and set about cleaning it up.

The depot had been used only for storage for the previous 36 years.

When Gass learned the light pole outside the building was the only source for electricity for a light or a vacuum cleaner, she climbed the pole to gain access.

Earl Gass, who initially said, “That’s a great idea, but don’t involve me,” built bookshelves. The lumber was purchased from donations that started rolling in after a story about the project appeared in The Courier.

John Schrader, the last person who worked at the depot, donated the railroad lantern he used to flag trains and Rademaker donated his model train.

Other donations, ranging from books to rugs to games and beanbag chairs, came from every town in Logan County.

“I stopped there one day and she was down on her hands and knees scrubbing the floor,” Rademaker said. “She said, ‘I think I can get it clean,’ and she did.”

The Whistle Stop Library opened in May 2007. It serves both children and adults in the community and Gass has initiated reading programs to promote children’s interest in books.

She continues to volunteer as librarian, maintenance worker and planner.

Now, she’s trying to raise $10,000 through craft shows and sales to put a foundation under the building.

“It’s sitting on railroad ties,” Rademaker said, “and varmits dig under it.”

Rademaker said when he received nomination forms for the Studs Terkel Awards, he said to his wife, “Boy, she’d be a good one for that.

“I had my wife write the letter and I told her what to put in it,” he said. “I’ve sent other names before, but they never got the award.”

Now Rademaker and the village board are planning a ceremony for Gass, to present her with her engraved medal of recognition.

The medals are struck in solid bronze by the Medallic Art Co. – the firm that makes both the Pulitzer Prize and the Peabody Award – and engraved with the names of the recipients and their communities.

Gass said many of her friends knew about the award before she learned the news.

“My mother just had a heart attack, so I moved her in with me,” Gass said. “I didn’t even get the mail for several days.”

When she saw the envelope, something on the outside made her believe that someone was asking her to volunteer for yet another project, so she temporarily set it aside.

“When I finally opened it,” she said, “I realized that I had won.”

“We are so pleased that in the 10th year of this program, we are able to honor these champions of the humanities that make their communities and our whole state more vibrant,” said IHC Executive Director Kristina A. Valaitis.”

Named after the prize-winning oral historian and author, Studs Terkel, the awards reflect the spirit of this prominent son of Illinois. Terkel was a modern-day renaissance man: an actor, playwright, jazz columnist, film narrator, and disc jockey. He is perhaps most admired for documenting 20th-century America through the words and voices of ordinary people.

Recipients were selected for their service in the humanities, which include significant and sustained efforts to further public understanding of, and appreciation for, the humanities at the community level. This program was started in 1999, in honor of the IHC’s 25th anniversary.