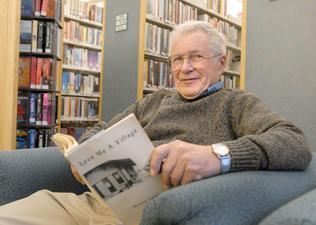 This article originally appeared in the Lemont Reporter.

Lemont, IL – Patte Doornbos has not been a Lemont High School student since the 1970s, but the impact one teacher made has left an impression to this day.

“At that time, the school was much smaller than it is now,” Doornbos said. “It was not uncommon for teachers to teach in more than one department, and students and teachers tended to get to know each other pretty well.”

Doornbos was in several of Michael Galati’s classes, including poetry and one on the great authors such as Emerson, Hawthorne and Thoreau.

“The most profound thing that I think I took from (him) is an appreciation for literature,” Doornbos said. “We did a lot of reading and analyzing of important works of literature in his classes, and to this day I can still quote some of the things we read.”

Recently Galati, 78, was chosen as a recipient of the 2009 Studs Terkel Humanities Service Award, presented to a local volunteer for outstanding efforts on behalf of the humanities in their community.

He joins one of 40 in Illinois to land the honor in the program’s 10th year.

Galati’s career at Lemont High School spanned 40 years, from 1953 until his retirement in 1993.

In assigning his Lemont High School students to write poetry, Galati decided he would try writing poetry himself, and published a volume in 1976 called “Love Me a Village.”

Besides teaching, Galati also found time to be active in the Lemont Writer’s Club and continues to teach and lead study groups at the Lemont United Methodist Church.

In the 1960s he spent six years on the Lemont Village board, and said his responsibility was zoning and building in the village “which has nothing to do with humanities.”

“Except it’s human to have people living in decent housing,” he said.

Galati is also a member of the Illinois State Poetry Society and still presents poetry readings throughout the Chicago area.

The Studs Terkel Humanities Service Award will be presented to Galati at the Nov. 23 Village Board meeting.

Galati was surprised to have won the award.

“Having retired so long ago I wasn’t expecting any recognition for anything,” he said. “It’s very nice.”

Lemont Mayor Brian Reaves said the former teacher fits the image of a Humanities Hero in every regard.

“In Mr. Galati’s 40-plus year career as a teacher of English and literature at Lemont High School, he challenged his students to understand the importance of reading and creative expression as well as the importance of reflection and critical thinking,” Reaves said.

Doornbos, now an LHS teacher in the science department and at one time a co-worker of Galati’s, said her former teacher treated everyone with respect.

“He taught us to see both sides of an issue, and to try to appreciate where someone else was coming from, whether it was an author whose work you were trying to understand, or a person with whom you might be having a disagreement,” she said. “He had a very positive mental outlook here at school, and I do believe it rubbed off on his students.”

Besides the Studs Terkel award, Galati is celebrating another milestone.

“We’ve already lasted for more than year,” he said. “We’re happy together.”