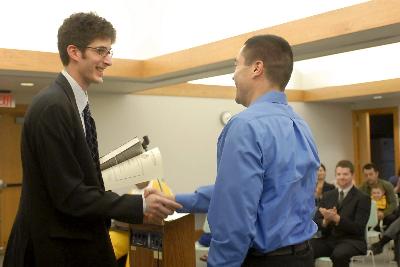 This article originally appeared in the Champaign-Urbana News-Gazette.

CHAMPAIGN – Homer Green couldn’t say enough nice things about the instructors who helped him rack up six hours of college credit for free.

On Saturday, the 32-year-old Champaign man was one of six graduates of the Odyssey Project to receive certificates for completing five humanities courses since last fall.

Green first saw an ad in the newspaper about the college coursework offered to low-income adults at no cost.

"I understood it was an extremely great opportunity and I wanted to be part of it," said Green, a husband, father of five, son, and brother who cares for three disabled siblings. "It’s a tremendous program. All of the instructors are wonderful."

Sponsored by the Illinois Humanities Council and the University of Illinois, with help from the Douglass Branch Library, the Odyssey Project just finished its third year.

Project coordinator John Marsh, an assistant professor of English at the UI who’s leaving to go to Penn State, said students take literature and philosophy in the fall, U.S. history and art history in the spring, and writing and critical thinking during both semesters. UI instructors teach the courses.

This year’s class dwindled from almost 30 to the six who were honored Saturday in ceremonies at the Douglass Branch Library, where the students met on Tuesday and Thursday nights from 6 to 8 p.m.

Marsh said attrition has been a problem all three years the program has been offered, but it was higher than normal this school year.

"I speculate endlessly" about why, he said. Changing work situations and sick family members are reasons often cited for dropping out. Some decide it just isn’t what they expected.

The program has typically had more women finishing, he said. This year, three men and three women graduated.

Green, who works two different jobs that add up to more than full time, said he’s taken classes part time for years at Parkland College and is working toward a bachelor’s degree in business administration with a minor in computers. His mother and children, who range in age from 1 to 12, were with him Saturday.

"I’m always looking for opportunities and programs out there," Green said, adding he aspires to have a doctorate some day. "No matter how long it takes me, I’m going to get it done."

Fellow graduates Julio Rosario and Joe Trotter learned about the program from friends and were equally enthusiastic about their experiences.

Trotter, the class valedictorian, works full-time for the Champaign-Urbana Public Health District as a prevention specialist. The courses were his first on a college level and taught him how to read, examine and dissect literature and art.

"I won’t read a book the same after taking John’s class," he said, adding he feels the same way about the way he looks at paintings. "If you would have told me two years ago that I would enjoy a philosophy class, I’d say you were crazy."

Program supporters hailed Marsh, who is leaving for Pennsylvania next month, for his passion in getting the project off the ground. Marsh said it will continue.