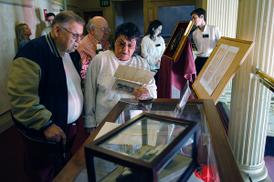 This article originally appeared in the Galesburg Register-Mail.

GALESBURG – Was there a conspiracy to assassinate Abraham Lincoln? Was Mary Todd Lincoln bipolar? Those were among the topics discussed Saturday during the symposium, "And How Was the Play, Mrs. Lincoln?" at the Orpheum Theatre.

The symposium was sponsored by the Orpheum Theatre, The Warren County Public Library and the Monmouth College Theatre. It was made possible, in part, by a grant from the Illinois Humanities Council, the National Endowment for the Humanities and the Illinois General Assembly.

Stacy A. Cordery, a history professor at Monmouth College, spoke on "The Life of Mary Todd Lincoln."

Only one of the Lincoln’s sons lived to adulthood, and "Mary was holding Abe’s hand when the bullet from John Wilkes Booth’s derringer ripped through her husband’s head," Cordery said.

Mrs. Lincoln was already controversial before her husband was elected president.

"She believed women to be better judges of character than men. … The first lady gave speeches to raise money for freed slaves and all this was controversial," Cordery said.

Mary Todd Lincoln was criticized from all quarters.

Known for her temper tantrums, as well as holding seances, the first lady spent lavish amounts of money on clothes.

"All of her grand intentions backfired," Cordery said.

After her husband was shot, Mary did not want to leave her husband’s side, but the men surrounding the president as he clinged to life ordered her out of the room.

"Imagine being her and, cruelly, not being there when the love of her life died," Cordery said. "She could not control her weeping, she could not see friends."

As his mother continued to suffer hallucinations and hold more seances, son Robert Lincoln eventually had here committed to an asylum.

"There are many, many theories about what was wrong with Mary Todd Lincoln, emotionally," Cordery said. "We will never really know. It might have been the  medicine she was taking, it might have been bipolar disorder."

Monmouth College history professor William Urban talked about conspiracy theories that swirled around the assassination of President Lincoln. There seems to be little doubt that John Wilkes Booth hatched plans – first to kidnap Lincoln and take him into Virginia, bringing the war to a successful conclusion for the South. But although about eight people were apparently involved in the plan to surround the president’s carriage, Lincoln’s plans changed and he was not in the carriage.

Booth apparently then wanted to kidnap the president from the theater, but his co-conspirators apparently saw no way that plan could work. Urban talked of how both John F. Kennedy and Lincoln were hated by many before their deaths, then become beloved figures.

"We know about Abraham Lincoln," Urban said. "Many people despised Lincoln, many people hated him and, all of a sudden, people loved him."

Urban said other "more exotic" theories soon sprang into being. One was that Vice President Andrew Johnson and Booth knew each other and Johnson had a hand in Lincoln’s death. Urban said there is little evidence of this. Another rumor was that the Catholic Church was behind the plot.

"The most famous conspiracy theory was developed in 1937," Urban said. "(Writer Otto Eisenschiml) argued that Edwin Stanton was behind the murder."

It was argued that Stanton feared Lincoln planned to go easy on the South and Stanton wanted to punish the Confederates.

"We have a series of theories," Urban said. "It’s sort of like watching an Oliver Stone movie … ."

Urban said people love conspiracy theories because they offer explanations for seemingly incomprehensible events, one can safely believe anything without suffering consequences and the theories offer notoriety and money to those who dream them up.

"Conspiracy theories also enhance the reputation of the victim," Urban said. "Lincoln, the original baboon is now the martyred president."

Monmouth College Crimson Masque presented "Our American Cousin," Saturday night and will perform it again at 2 p.m. Sunday at the Orpheum. This is the play the Lincolns attended the night of the assassination. To reserve tickets, call the Orpheum box office at (309) 342-2299. Tickets also are available at the door.