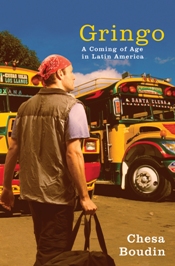 The author and activist will discuss his acclaimed new memoir Gringo: A Coming of Age in Latin America.

CHICAGO – Join The Public Square, a program of the Illinois Humanities Council, for a conversation and book release party for Chesa Boudin and his new memoir Gringo: A Coming of Age in Latin America. This event will take place on Monday, April 20 from 6:00 p.m. to 8:00 p.m. at the Jane Addams Hull-House Museum (800 S. Halsted St., Chicago). It is free and open to the public. Reservations are recommended and can be made at 312.413.5353.

Gringo charts the sweeping transformation of Latin American politics from Hugo Chávez’s inauguration as president of Venezuela in 1999 and the rise of a new generation of progressive Latin American leaders. It weaves together the voices of Latin Americans–both rich and poor–and the endeavors of a young traveler to understand the world around him while coming to terms with his own complicated past.

Chesa Boudin is a twenty-eight year old Rhodes Scholar with degrees from Oxford and Yale Universities. In addition to Gringo, he has written for The Nation magazine, coauthored The Venezuelan Revolution: 100 Questions and 100 Answers, and co-edited Letters from Young Activists.

This program is co-sponsored by The Public Square, a program of the Illinois Humanities Council, the Latin American and Latino Studies at University of Illinois at Chicago, and the Jane Addams Hull-House Museum.

ABOUT THE PUBLIC SQUARE
The Public Square, a program of the Illinois Humanities Council, fosters debate, dialogue, and exchange of ideas about cultural, social, and political issues with an emphasis on social justice. Programs promote participatory democracy by creating space for public conversations. More information about The Public Square is available at www.prairie.org/publicsquare.

The Illinois Humanities Council is a nonprofit educational organization [501 (c) 3] dedicated to fostering a culture in which the humanities are a vital part of the lives of individuals and communities.  Organized in 1973 as the state affiliate of the National Endowment for the Humanities, the IHC creates programs and funds organizations that promote greater understanding of, appreciation for, and involvement in the humanities. The IHC is supported by state, federal, and private funds.