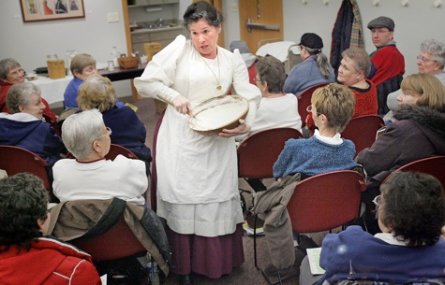 This article originally appeared in the Northwest Herald.

HARVARD – If you were going to travel back in time to a kitchen in 1909, what item might you sneak into your pocket?

For Ellie Carlson, the answer is easy: Rubber spatula.

Carlson made the pronouncement during a 1909 cooking demonstration Thursday at Harvard Diggins Library. The class, sponsored by the Illinois Humanities Council, was part of the library’s centennial celebration.

Carlson, dressed in period clothes, regaled an audience of about 60 with pithy stories, historical nuggets and 1909 cooking knowledge.

Carlson showed the audience how to make bread from scratch. She mixed. She kneaded. She stirred. Then she asked for a hot place so it could rise. The top of a computer monitor was chosen, although in 1909 the location likely would have been the back of a stove.

"This was wonderful, it really takes you back in time," Harvard resident Karen Sutera said. "It showed what a wife had to go through. The food preparation was a lot of work. I kept thinking what it would have been like to do all that in a 90-degree kitchen."

In 1906, the passage of the Pure Food and Drug Act meant that canned goods were much safer by 1909. Labeling requirements and other measures meant that consumers could have some confidence in what they were buying.

For her vegetable, she made tomato fritters. In March, fresh tomatoes would not be available in 1909, but canned tomatoes were. The main course was scalloped oysters. Carlson said that in 1909, oysters were not an uncommon meal.