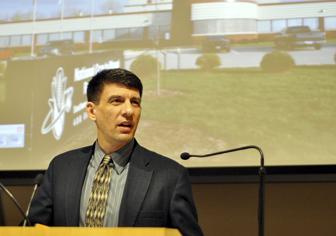 This article originally appeared in the Southern Illinoisan.

CARBONDALE – "Crosscurrents" was an apt term for a discussion on ethanol Tuesday that blended ethical concerns with the main fuel of technology.

Dimitra Tasiouras, IHC director of programs and partnerships, said oil and water "intersect in the production of ethanol" and "both involve tough decisions about stewardship of resources."

Stikkers said sponsorship of the discussion by the humanities council was appropriate, because ethical issues are involved. "Is the energy gain worth the costs?" he asked.

His concerns include the impact of increased corn production for ethanol in developing countries, with small farmers being driven from their land to make way for crops that can produce ethanol and increasing the gap between rich and poor.

The increasing price of food crops used in ethanol production "is pushing an increasing proportion of the developing world over the edge," Stikkers said. Water is diverted to be used for crops instead of families, and fertilizers are contaminating water supplies, he said.

Caupert, who grew up on a Perry County farm, is now working to facilitate the commercialization of ethanol production. He advocates the alternative fuel to help American farmers increase their profits. Caupert showed a slide from 1933 in Lincoln, Neb., with a service station sign urging drivers to "try corn ethanol."

The ethanol industry can create jobs, decrease U.S. dependence on foreign oil and reduce greenhouse gas emissions. He said the amount of water used in producing a gallon of ethanol decreased from 6 gallons in 1994 to 2.91 gallons in 2007. He expects that soon will drop to 1.5 gallons of water to make a gallon of ethanol.

Altman, who grew up on a farm in Saskatchwan, has done considerable research on creating ethanol from a product he knows well – wheat straw. Using the straw would avoid diverting corn and similar commodities from the world’s food supply, he said, but making "cellulosic" ethanol is not yet financially feasible. He is now studying ways to get wheat producers and the ethanol industry together.

"We won’t run out of oil," Altman said. "At some point the price will get so high we will go to alternative fuels." Corn ethanol, he said, can provide a "bridge" until users give up oil.

“Kaskaskia and the Pursuit of a More Perfect Union, Part 1” Online Premiere

Public Programs, The Country and the City