“Leonardo Padura is now the face of Cuban literature inside the island and we are tremendously lucky that this is so.” —Yoani Sanchez, Huffington Post

Register and join the IHC, Contratiempo, Instituto Cervantes of Chicago, and the Latin American and Latino Studies Program at UIC for a very special visit from Cuban novelist Leonardo Padura, as part of his U.S tour for his new novel, El Hombre Que Amaba a los Perros (The Man Who Loved Dogs).

El Hombre Que Amaba a los Perros was first published in 2009 and is now appearing in a new English translation. The book is a fictional account about the assassination of Leon Trotsky by Ramon Mercader. The result of more than five years of meticulous historical research, it is Padura’s most accomplished work and was a finalist for the Book of the Year Award in Spain.

“More concerned with the emotional life of its characters than with their historical roles, the novel still imparts a sense of reality, thanks to its deft handling of an astonishing quantity of information about Trotsky and
Mercader’s lives.” —Alvaro Enrigue, The New York Times

The evening will include a reading by Padura in Spanish, with simultaneous interpretation, followed by a bilingual conversation with Jochy Herrera and Gerardo Cardenas of Contratiempo Chicago and the audience.

Copies of The Man Who Loved Dogs will be available during a book signing following the discussion.

This event is free and open to the public. However, registration is required and can be made online.
Leonardo will also present a free lunch-time workshop at the UIC Latino Cultural Center on Friday Feb. 28.
Click here for details about the lunch-time presentation. 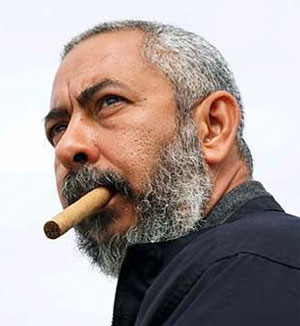 More About the Author:
Leonardo Padura Fuentes was born in and continues to reside in Havana, Cuba. Born in 1955, he is a novelist, journalist, and critic, and is the author of several novels, two volumes of short stories, and several nonfiction collections. Padura first came to prominence as an investigative journalist in a literary magazine called Caimán Barbudo. Padura is best known in the English-speaking world for his quartet of detective novels featuring lieutenant Mario Conde, Las Cuatro Estaciones (The Four Seasons). His novels featuring the detective Mario Conde have been translated into many languages and have won literary prizes around the world. The Man Who Loved Dogs was a finalist for the Book of the Year Award in Spain. Click here for more books by Padura.

We are pleased to partner with the Instituto Cervantes of Chicago, the Latin American and Latino Studies Program at the University of Illinois at Chicago (UIC), Contratiempo and UIC’s Social Justice Initiative, Hispanic and Italian Studies Department & Rafael Cintrón Ortiz Latino Cultural Center.

This event is part of Bridging Divides, a series that draws on the humanities to help local communities address seemingly intractable social, cultural and political divides. The Bridging Divides series is made possible in part by the generous support of The Boeing Company and is part of the IHC’s Conversations on Contemporary Issues program.