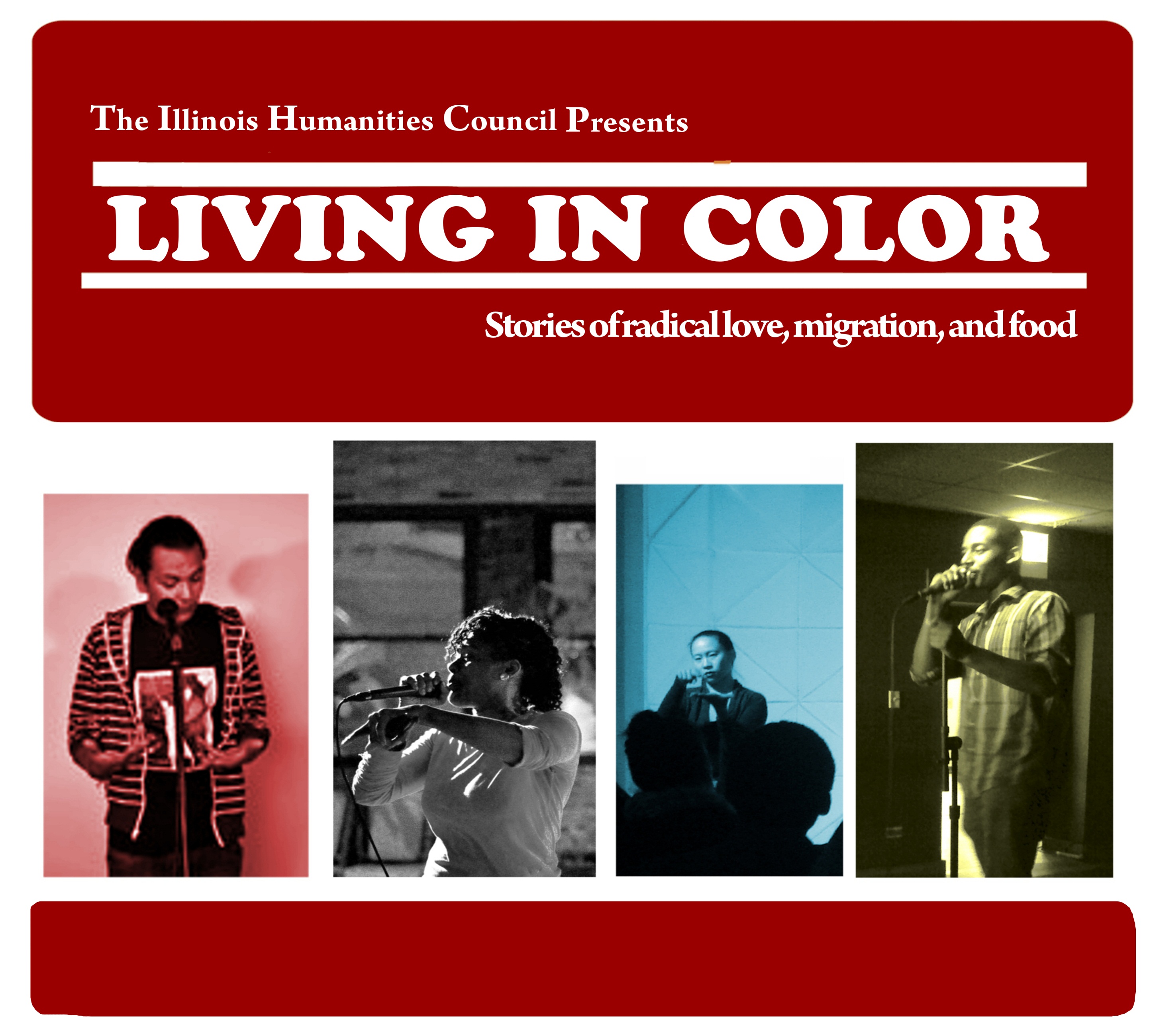 The Illinois Humanities Council’s  Living in Color storytelling series comes to a close with an evening exploring race, ethnicity, nationality, culture and the complicated question: “what are you?”

Every so often when filling out paperwork we’re required to “check one box” and identify our race. But our identities are much more complex than one box. How do we define ourselves in relation to the many markers of racial and ethnic identity we claim — or have imposed on us? How can these identifications affect our relationships in today’s society?

Lily Be, storyteller and Moth StorySlam champion from Chicago, along with three featured storytellers will be sharing powerful stories that explore issues of identity followed by an engaging dialog where you can share your own experiences with defining the self.

Erica Clark started her comedy career at Chicago’s famed Improv Olympic, after four years, she decided to try her hand at Stand up and Storytelling.  Erica has performed in the TBS Just for Laughs Fest; as well she is the past Grand Slam Moth winner

Carly Oishi is a writer, performer, singer, songwriter and caretaker. She is the co-producer of Miss Spoken, the blog (miss-spoken.com) and live-lit show. She’s also the singer and almost full-time songwriter in her duo Jon & Carly, which has been making and performing music for almost ten years.

Tim Stafford is a poet and public school teacher. His work has appeared on the HBO series Def Poetry Jam and at literary festivals around the world. He is a former Chicago Poetry Slam Champion and the editor of the educational poetry series “Learn Then Burn” on Write Bloody Press. In October, he will be sharing the bill at the Wordz Festival in Luzern, Switzerland with Patti Smith

Lily Be (curator) has been sharing stories since 2009. After her debut at Grown Folks Stories, she caught the bug and has been performing ever since. She’s performed at almost every storytelling event in the city and has been featured on Chicago Public Media stations WBEZ and Vocalo. Lily is a moth GrandSLAM champion and hosts her own storytelling event, Stoop-Style Stories in Chicago’s Humboldt Park at Rosa’s Blues lounge every 4th Thursday of the month.

Lawrence “Binkey” Tolefree (moderator) accents his poetry with captivating lyrics and soul-filled melodies. His passion for performance and seemingly endless energy are fueled through fantastically rowdy fans that enjoy his sense of humor. Binkey is one out of eight poets of the prolific poetry ensemble called Verbal Balance. Some of the accomplishments that Binkey has been awarded include: 2006 MGD Freestyle Champion, BET New Face Finalist, Jokes and Notes Open Mic Stand-up Winner, Mixtape Mondays Rap Battle Champion, Creator of Just-Us Improv, Actor in numerous plays at Chicago Theatre, DuSable Musuem and Apollo. Binkey can do it all.

If you need a sign interpreter or require other arrangements to fully participate, please call 312.422.5580 at least 72 hours prior to the event.

According the venue’s policy, attendees must be 21 and over.

For parking locations near the facility, please visit ChicagoParkingMap.com.