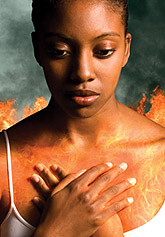 In the Democratic Republic of the Congo, tens of thousands of women have been raped in what the United Nations officials have called the worst violence against women in the world. In a culture where rape brings victims more shame than assistance, how are women finding safe ways to speak out about their suffering?

CONTEXT, The Goodman Theatre’s issues series, engages the community – at the theater and across the city – in conversations that illuminate their productions and act as catalysts for deeper exploration. Unlike post-show discussions that focus primarily on the production, CONTEXT events concentrate on particular issues raised within the plays and explore how they resonate in today’s culture. Whether looking at the issues of identity and how we define ourselves, or how issues of race and class play themselves out in Latin America, CONTEXT offers public space for debate and discussion.

This event is co-sponsored by  The Goodman Theatre , The Public Square and University of Chicago’s Center for the Study of Race, Politics, and Culture.

Lynette Jackson’s current research focuses on child refugees from civil war in Sudan and on gender and generation in postwar reconstruction. Dr. Jackson is the author of Surfacing Up: Psychiatry and Social Order in Colonial Zimbabwe, 1908-1968 (Cornell University Press, 2005). In addition to her scholarship, she serves on various boards and advisory committees addressing human rights and social justice issues, including the Chicago Committee of Human Rights Watch, and The Public Square, The National Women’s Studies Association’s International Taskforce and a Chicago-based group devoted to combating Sexual and Gender Based Violence (SGBV) called WTO (Where is The Outrage?).  Dr. Jackson is also a member of the Editorial Collective of Radical History Review.  She is an Associate Professor of Gender and Women’s Studies and African American Studies at University of Illinois, Chicago and holds a Ph.D in History from Columbia University.

Dr. Ngozie T. Udoye is the President and Founder of African Women in America.  Popularly known as Ngozie and called "NG" she is an Igbo woman from Igbo-Ukwu, the archeological city of Nigeria. Dr. Udoye is a summa cum laude graduate and received an Indirah Gandhi award as the most outstanding graduate from the University of Nigeria.  She has challenged herself by taking up a mission whose objective is to work with and for African women and children, with a focus on working with women to develop their self-empowering abilities. While in Nigeria, NG developed projects for women in prison as well as youths in rural areas. She has been a teacher at all levels of education – from kindergarten to graduate level in Nigeria, Ghana and United States. NG has visited sixteen countries in Africa. She has also visited many countries in Europe.  In 2003, she moved to the United States as a missionary, a researcher and a student. NG received her Masters and Doctoral degrees from Loyola University, Chicago. Dr. Udoye has spent the greater part of this past year in directed efforts towards helping to found the non profit organization – African Women in America Organization (AfWiAm), conducting studies on The African Woman and ministering to victimized and traumatized African women and children. This budding organization hopes to provide an All-African network of persons, groups/organizations and agencies here and abroad that care for children and women. It is an organization of women with one Body and one Voice, which calls all women and men irrespective of class, creed or country of origin – to join in the mission.

Martine SongaSonga has devoted her career to human rights causes. She is currently employed as a Senior Mental Health worker with International Faces, a program of Heartland Alliance. Her work involves assisting African refugees and asylees (individuals and families) to adjust to life in the U.S by providing various services such as case management and counseling. After graduating from Law School in 1993, she served as legal advisor for a mining company GECAMINES, in Lubumbashi, her home city. As a human rights advocate, she served as a chairperson of the Women’s Department and General Secretary for the centre de droits de l’homme et du droit humanitaire; "Center for Human Rights and Humanitarian Law" (CDH), a volunteer (human rights activist) position in which she provided legal advocacy and assistance to women whose rights had been violated.  Since 1999 she has been a member and volunteer of the Torture Abolition and Survivors Support Coalition (TASSC), working with organizations around the world to eradicate torture, and provide material, social and psychological support for those who have experienced torture in their home countries.  She holds a Masters Degree from University of Notre Dame in Peace Studies as well as a Law degree from University of Lubumbashi, D.R. Congo and has completed post-graduate work at Loyola University, Chicago.

Rozwell W. "Prexy" Nesbitt is currently teaching African History at Columbia College. He served as the Senior Multiculturalism and Diversity Specialist at the Chicago Teachers Center/Northeastern Illinois University; as well as a Consultant on Diversity for Francis W. Parker School and University of Chicago Laboratory Schools, and East Educational Collaborative, Washington, DC.  An expert in African Studies, Dr. Nesbitt has served as an instructor and advisor for a multitude of prominent organizations including the Urban Studies Program for Associated Colleges of the Midwest, a Senior Program Officer for the MacArthur Foundation, the Southern African Representative for American Center for International Labor Solidarity, Johannesburg, South Africa; and Interim Director for American Friends Service Committee Africa Program (Philadelphia); and National Organizer for Africa Action (Washington DC).  He holds a PhD in African History from Northwestern University, a Ph. D. in Social Thought and African History from University of Chicago and a Ph.D. in Political Science and African History, Certificate in African Studies, from Columbia University.