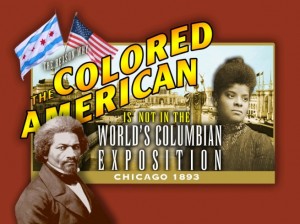 This event is part of a new exhibition at the UIC African American Cultural Center called “The Reason Why the Colored American is Not in the World’s Columbian Exposition.” The exhibition recognizes the 120th anniversary of the World’s Columbian Exposition of 1893 as an opportunity to relate historical accounts of AfricanAmericans’ experiences of the Fair to contemporary debates over large-scale public festivities in Chicago.

Additional public programming related to “The Reason Why” exhibition will include historical reenactments at the Carter G. Woodson Library, a public reading with the great-granddaughter of Ida B. Wells at the Jane Addams Hull House Museum, a musical tribute at Quinn Chapel AME Church, and an interdisciplinary panel discussion at the DuSable Museum of African-American History.

For more information contact: African-American Cultural Center at UIC at 312-996-9549, via email at uicaacc@uic.edu or online at https://aacc.uic.edu.