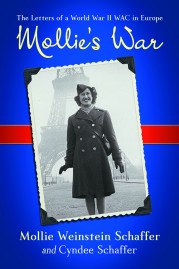 Drawing upon excerpts from Mollie’s letters written home during the war, this presentation provides a romantic, yet frightful, glimpse into the life of a woman in uniform during this crucial time in history.

This presentation details Mollie’s experiences from basic training in Florida in October 1943 to the dramatic moment when the Statue of Liberty came into view upon her return in November 1945. It traces the footsteps of the women who served in Europe, following Mollie and her fellow WACs who were stationed in London, England before D-Day and during the post D-Day German buzz bomb attacks.

This event is Free and Open to the public. For more information, please contact William Abate at william4abate@comcast.net.