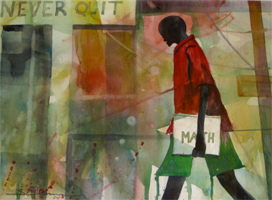 As part of the 18th Annual “Black Harvest Film Festival,” the Gene Siskel Film Center will premiere the documentary, The Curators of Dixon School.

Join us for this documentary (2011; 80 min.), which features a powerful story about lessons learned when art is at the heart of education.

The Curators of Dixon School was filmed over a two-year period and features the art of Dayo Laoye, Carolyn Elaine, Peter Gray and Faheem Majid, among many others. This documentary film also includes original music composed by Emmy-Award winning trumpeter Orbert Davis and additional music by Aisha Kahlil of Grammy-Award winning African-American a capella ensemble Sweet Honey in the Rock.

Director Pamela Sherrod Anderson will be present for audience discussion at the screening.

Tickets are $11/person and can be purchased at The Gene Siskel Film Center box office or online.

This film is made possible in part by a grant from the Illinois Humanities Council, the National Endowment for the Humanities, and the Illinois General Assembly.